The oldest U.S. Senator in Oklahoma history now has the most victories from the state in races to the nation’s upper legislative chamber 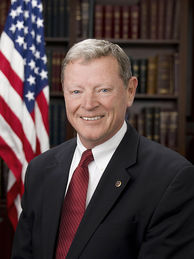 With all precincts reporting, Inhofe beat Silverstein by 39.5 points with 68 percent of the vote.

Tuesday’s victory, the fifth for Inhofe, marks the most U.S. Senate election wins by an Oklahoman since statehood.

Inhofe – who won a 1994 special election to replace Democrat David Boren – has now won four subsequent six-year terms and moved ahead of three other Oklahoma U.S. Senators who had won four such races.

The first was one of the state’s inaugural senators, Democrat Thomas Gore, who won his seat in 1907, was reelected in 1908, and then was victorious in the state’s first direct election to the chamber in 1914 before losing his renomination bid in 1920.

Ten years later, however, Gore was elected to Oklahoma’s other Senate seat for his fourth victory and served six more years before losing another renomination bid in 1936.

Democrat Elmer Thomas was next – winning the Elections of 1926, 1932, 1938, and 1944 before losing his renomination bid in 1950 to Congressman Mike Monroney. (Monroney and Thomas emerged from a seven-candidate Democratic primary to a runoff where the U.S. Representative won 53 percent of the vote).

Inhofe is both the oldest Oklahoman in history to be elected to the U.S. Senate as well as the oldest to serve the state in the chamber.

The only other Senator from Oklahoma to serve in their 70s was Democrat Elmer Thomas who exited at 74 years, 3 months, 26 days of age in 1951.

Senator Infhofe currently ranks third in the state for the most days served in the nation’s upper legislative chamber at 19 years, 11 months, 18 days (7,157 days) through Tuesday.

Nickels and the aforementioned Elmer Thomas each served four full terms, but Thomas served only 23 years, 9 months, 30 days (8,706 days) because his service began when Congressional terms began and ended on March 3rd and he exited the chamber after that date had changed to January 3rd.