Gains in the stock market last Wednesday after the GOP wave were only slightly above the historical average; the biggest day-after drops in the market have occurred after the election of Democratic presidents 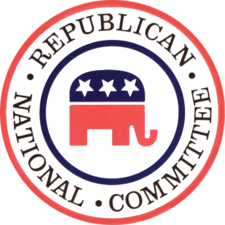 At the close of markets last Wednesday, the Dow Jones finished up 100.69 points, one day after Republicans won enough seats to take back control of the U.S. Senate in 2015 and expand their advantage in the House of Representatives by double-digits.

The 100-point gain marked only the second time in history that Dow Jones enjoyed triple-digit gains the day after a U.S. presidential or midterm election – just slightly behind the 101.32 rise after George W. Bush was reelected in 2004.

On the surface, that seems like a Wall Street endorsement of the electoral results.

However, with the market north of 17,000 these days, there was perhaps less to the market gains than meets the eye.

Smart Politics examined the Dow Jones Industrial Average closing values on the Wednesday after Election Day going back to 1900 and found that the bump on November 5, 2014 was only the 25th biggest increase across the last 57 cycles.

(Note: DJIA Data was retrieved from Measuring Worth).

Overall, markets have risen after Election Day more often than not since the turn of the 20th Century, with the DJIA up after 33 elections and down after 24.

The biggest bump in the market came after the 1982 midterms, when Democrats wiped out most of the large GOP gains in the U.S. House two years prior when Ronald Reagan was elected president.

All other cycles with market gains of two percent or larger on the day after the election took place 60 or more years ago:

And which cycle saw the biggest drop in the market after Election Day?

That came after the election of Barack Obama in 2008 which also saw Democratic gains of 21 U.S. House seats and eight seats in the U.S. Senate.

To be sure, markets had already fallen substantially in 2008 prior to Election Day (dropping 27.4 percent since January 1st), which no doubt aided the Democrats in their gains that cycle, though the Dow Jones had enjoyed a sharp 3.28 percent increase on Election Day, November 4th.

To the extent markets ‘respond’ at all to Election Day results, the Dow Jones has generally lost value the day after the election of Democratic presidential nominees. (Note: The data here is merely correlative, as there are more forces than simple electoral politics driving gains and losses in the market on any given day, even the day after an election).

In fact, five of the biggest seven post-Election Day market losses came after the election of a Democratic president:

The other two post-Election Day losses that saw the market shed at least two percent of its value came in 1930 after big Democratic gains (+52 House, +8 Senate) and in 1946 after large Republican gains (+55 House, +13 Senate). 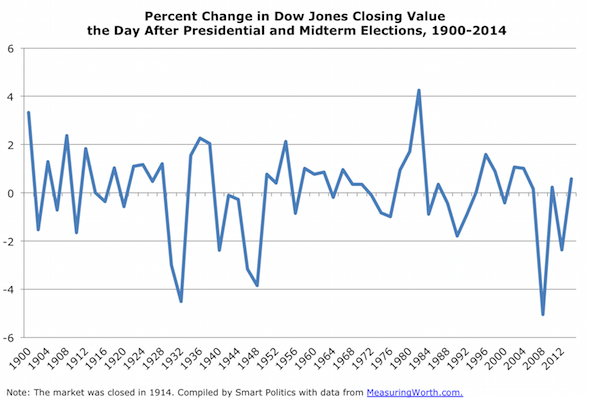 Posted in Economy and jobs, National Politics and tagged news