The Michigander served alongside 86 percent of all female U.S. Representatives elected to the chamber through the 113th Congress 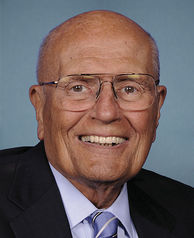 With just a few weeks left in his record-setting tenure on Capitol Hill, Michigan Democratic U.S. Representative John Dingell will soon be saying his good-byes to dozens of colleagues in Congress.

Dingell, of course, owns the mark for the most days served in Congress.

The 30-term Democrat will hit the 59-year mark in the nation’s lower legislative chamber on December 13th and will end his legislative career in January with 59 years and 21 days of service.

Smart Politics has previously reported on the other jaw-dropping numbers Dingell has amassed while in office including the number of men and women he has served with in the chamber since taking office in December 1955.

Since that report was published two special elections were held in Florida and three were conducted on November 4th that saw the election of Democrats Donald Norcross in NJ-01 and Alma Adams in NC-12 and Republican Dave Brat in VA-07 to pad Dingell’s numbers even more.

Dingell ends his career having served alongside 2,453 U.S. Representatives across his 59+ years in office.

On the other end of the spectrum, the Michigan congressman served alongside only four U.S. Representatives from Alaska and eight each from Delaware, Vermont, and Wyoming. 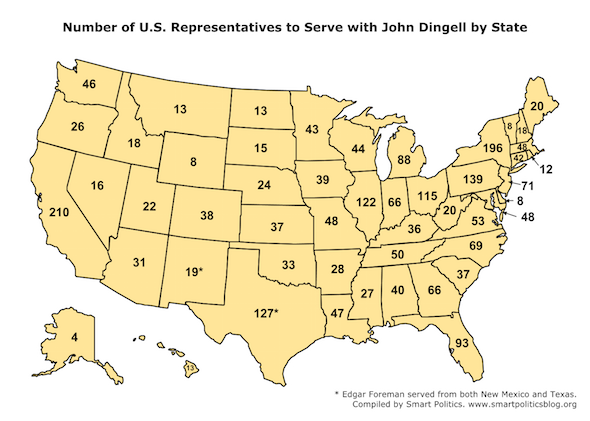 Since entering the U.S. House, Dingell worked with a total of 1,256 Democrats, 1,178 Republicans, and 19 representatives who either switched parties or served as independents.

Over 90 percent of the Michigan Democrat’s colleagues have been men during his years in office: 2,229 men and 224 women.

That means Dingell has served with 86 percent of the 261 female U.S. Representatives who took office through the 113th Congress.

(During his tenure between 1933 and 1955, Dingell’s father, John Sr., worked with 27 of the remaining 37 female U.S. Representatives who exited the chamber before John Jr. took office).