More than 135 guests have appeared with the First Lady since the president’s first SOTU speech in 2010, but none from 16 states 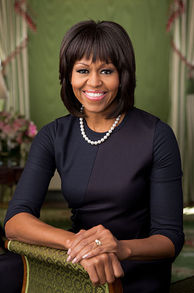 When the State of the Union guest list for Michelle Obama was announced Monday, more than a dozen states looked on with what has become familiar disappointment that none of its residents were invited to sit in the guest boxes of the First Lady for the sixth consecutive year.

Across the six official State of the Union Addresses delivered by her husband through Tuesday, Michelle Obama has invited 138 non-administration guests to join her.

Sixteen states, however, have yet to see one of their own receive invitations and rub shoulders with the current First Lady.

Of course, many of these aforementioned states are among the lowest in population. Collectively, these 16 states account for just 80 Electoral College votes.

Two states got off the schneid in 2015 – Tennessee and Rhode Island – with the First Lady welcoming a community college student from the former (Chelsey Davis) and the CEO of CVS (Larry Merlo) from the latter.

Not surprisingly, at the top of the heap is California which has seen 16 of its residents invited by Michelle Obama since 2010 including four this year.

Arizona is next with 13, followed by the District of Columbia with 10, North Carolina and Texas with eight, Michigan with seven, Colorado, Pennsylvania, and Virginia with six and Illinois with five. 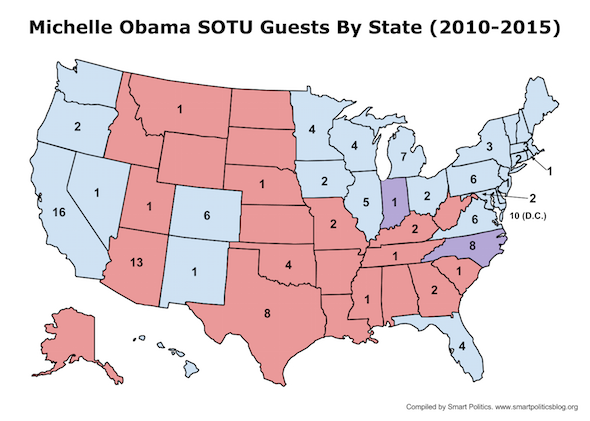 Overall, the First Lady has invited 94 guests in states won by President Obama during the previous election cycle (70 percent) and just 40 from those states carried by his opponents. (Four other guests were administration or governmental officials or residents of U.S. territories).

But not all heavily populated states have had a strong presence in the guest box of the First Lady over the last six years.

New York has only had three guests including one tonight (Anthony Mendez, a student from the Bronx) and battleground Ohio has had just two.

The only state in which at least one of its residents received a guest invite from the First Lady in each of President Obama’s six SOTU addresses is North Carolina.

Residents from California have been invited to five of Obama’s SOTU addresses with those from Arizona, Colorado, Florida, Illinois, Michigan, Texas, and Virginia to four.