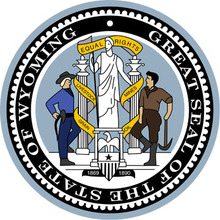 It was a surprise to no one when Wyoming’s Matt Mead and Tennessee’s Bill Haslam cruised to to 32- and 47-point reelection victories last November.

Both Republican incumbents were heavily favored in increasingly red states with national GOP-friendly winds at their backs.

In doing so, voters in Wyoming and Tennessee extended the nation’s two longest streaks of voting against the party of the sitting president in gubernatorial elections.

But those states are not alone in increasingly becoming political naysayers to what is happening in Washington, D.C. in prominent statewide elections.

A Smart Politics study finds that voters in 10 states have voted against the party of the sitting president in every gubernatorial election since at least 1994, with Wyoming (1982) and Tennessee (1986) owning the longest current such streaks in the nation.

Wyoming has now gone nine consecutive elections voting into office a governor who was not from the sitting president’s party dating back to 1982.

Meanwhile, Republicans Jim Geringer (1994, 1998) and Matt Mead (2010, 2014) got the nod from the Wyoming electorate while Bill Clinton and Barack Obama were in the White House respectively.

Herschler was the last gubernatorial candidate elected in the state from the sitting president’s party when he won his second term in 1978 with Jimmy Carter in D.C.

Tennesseeans, meanwhile, have now voted against the party of the president in eight consecutive gubernatorial contests since 1986.

Eight other states have voted against the party of the sitting president for at least the last 20 years, with seven of these keeping their streaks alive last November.

Victories by Republican nominees in Arizona, Maine, and Michigan last November extended the streaks in those states to six contests in a row since the 1994 cycle.

Iowa has done so in four consecutive cycles, with North Carolina and Ohio at three, and 11 other states at two. 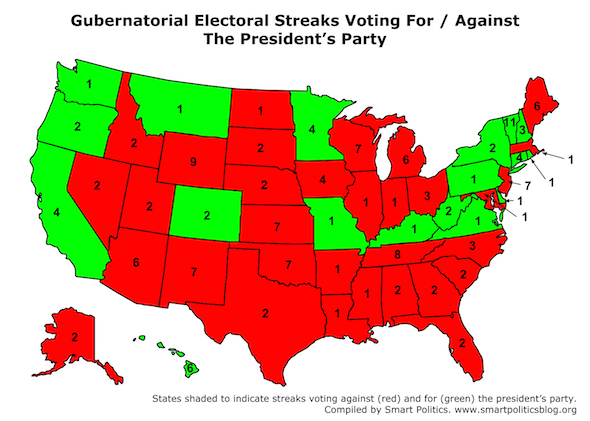 On the other side of the coin, just two states have voted governors of the sitting president’s party into office in every cycle since 1994 – Vermont (11 times) and Hawaii (six).

Sandwiched in between, the Green Mountain State electorate cast their gubernatorial ballots for Republican Jim Douglas during all four cycles in which George W. Bush was in office (2002, 2004, 2006, 2008).

The 11-cycle streak is the longest ever in Vermont.

Connecticut, Minnesota, and California have voted governors into office from the party of the sitting president for the last four elections each, with New Hampshire doing so three times, and Colorado, New York, Oregon, and West Virginia twice.