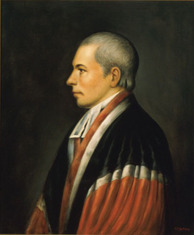 With St. Patrick’s Day upon us, Smart Politics turns its lens on the dozens of members of Congress who were born in Ireland – most of whom immigrated to the United States in the 18th and 19th Centuries.

Smart Politics examined information in the Biographical Directory of the United States Congress and finds there have been a total of 111 U.S. Representatives who were born in Ireland, 16 U.S. Senators, two territorial delegates, and two who served in more than one of these positions.

(An additional 11 individuals from Ireland did not serve in the U.S. House or Senate but were members of the Continental Congress).

Forty percent of all Irish-born members of Congress have come from two states – New York and Pennsylvania.

For most of the 19th Century New York and Pennsylvania also had the largest congressional delegations in the country overall.

Ohio is next with 10 Irish-born members followed by New Jersey with nine, Illinois with eight, Indiana and Missouri with four, and California, Georgia, Kentucky, Louisiana, Maryland, Massachusetts, South Carolina, and Virginia with three.

Michigan, Minnesota, Nevada, Rhode Island, and Tennessee have had two each while Arkansas, Colorado, Florida, Idaho, Iowa, Mississippi, New Mexico, North Carolina, Oregon, Vermont, Wisconsin, and Wyoming have had one.

A total of 32 states have had at least one Irish-born member in the upper or lower legislative chambers. 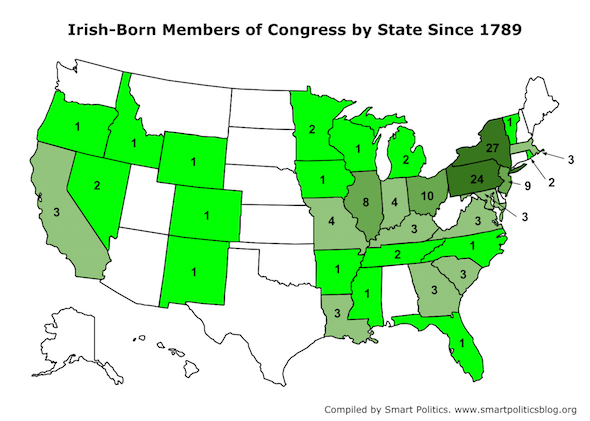 Notable members of the U.S. House or Senate who were born in Ireland include:

William Paterson of New Jersey (pictured at top, born in County Antrim) who served just shy of one term in the U.S. House from 1789 to 1790 before resigning to become the second Governor of New Jersey. Paterson would serve in that position until 1793 when he became an Associate Justice of the U.S. Supreme Court until his death in 1806. 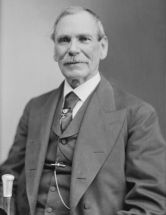 Democratic U.S. Senator James Shields (Altmore, County Tyrone) is the only American in history to serve in the U.S. Senate from three different states. Shields was first elected from Illinois (1849-1855), then Minnesota (1858-1859), and then Missouri (1879) where he served for just over a month.

Ohio Republican Thomas Young (Killyleagh, County Down) became Governor of Ohio after Rutherford Hayes resigned after winning the presidential Election of 1876. Young served for approximately 10 months and then won a seat in the U.S. House where he served for two terms from 1879 to 1883.

In addition to James Shields mentioned above, one other Irish-born member of Congress served multiple states.

Democratic-Republican U.S. Representative Matthew Lyon was first elected to the chamber for two terms from Vermont (1797-1801) and then four terms after he moved to Kentucky (1803-1811).

Of course, most of the members of the nation’s upper and lower legislative chambers who were born in Ireland served in the 18th and 19th Centuries when there was a significant level of immigrants from that nation.

The most recent Irish-born U.S. Representative to pass away is Democrat Michael Stack of Pennsylvania.

Earlier that year also brought the passing of New Jersey Democrat Eugene Kinkead at the age of 84.

Kinkead was born in Buttevant, County Cork while his parents were abroad in 1876 and later was elected for three terms to the U.S. House from 1909 to 1915.

There have been more than twice as many Irish-born Democrats than Republicans serve in Congress.

Sixty-two such Democrats (plus four independent Democrats) have served since the 1830s compared to just 30 Republicans/Whigs (plus one Liberal Republican).

There have also been Populist, Greenback, and Anti-Masonic Irish-born members during the two-party era.

* Served from the Orleans Territory. Compiled by Smart Politics.