There are over two-dozen airports named for 15 different U.S. presidents totaling more than 250,000 feet of runway 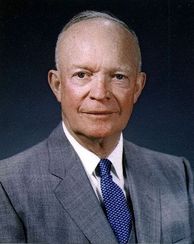 Chicago Mayor Rahm Emanuel raised eyebrows last week when he suggested that the city might name an airport after Barack Obama.

The notion that an airport might one day be named after Obama – in Illinois or elsewhere – is hardly farfetched.

Of the 12 former presidents to serve since Franklin Roosevelt, only two do not yet have an airport named after them – Richard Nixon, who left office in disgrace, and George W. Bush who has only been retired for a shade over six years.

The official naming of another presidential airport took place in the Midwest earlier this year, with Wichita Mid-Continent Airport renamed as Wichita Dwight D. Eisenhower National Airport in an official ceremony on January 26th (though recognized by the FAA as such in late 2014).

Though born in Texas, Eisenhower was mostly raised in Kansas, is buried there, and Kansas is also home to his presidential library in Abilene where the petition campaign for renaming the Wichita airport began.

However, Wichita does not have the first airport named after the nation’s 34th president – in fact, it wasn’t even the first in Kansas: in Leavenworth one can find the Dwight Eisenhower VA Medical Center Airport.

So just how many such presidential airports are there?

A Smart Politics review of world airport codes finds that 15 presidents have had a total of 26 airports named in their honor across 15 states and in one foreign municipality.

Not surprisingly, all but four of these presidents served in the 20th Century.

Many, however, are not national or international airports but rather smaller airports or those attached to hospital or military facilities with runaways as short as 35 to 50 feet.

Six presidents have more than one airport named after them: Harry Truman and Eisenhower with four, John Kennedy with three, and Abraham Lincoln, Franklin Roosevelt and Jimmy Carter with two each.

Not surprisingly, many of these two-dozen plus airports are located in the home states of the respective presidents, though not all.

In fact, not all presidents even carried the states in which their airports are located in their various electoral bids.

Overall, these 26 presidential airports have 45 runways tallying more than 253,000 feet.

The longest presidential airport runway at 15,000 feet is at the Harry S. Truman Dam & Reservoir Seaplane Base Airport – though that is a water runway.