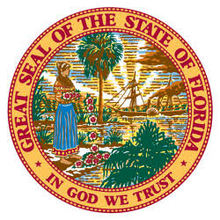 In an attempt to elevate the importance of its role in the selection of presidential nominees, several states in recent cycles have attempted to reposition their presidential primary or caucus date toward the front end of the calendar.

Of course, simply because a state holds its caucus or primary early in the year does not mean it ultimately becomes a kingmaker in deciding which candidate will become the nominee.

For the Republicans, the Iowa caucuses (and caucuses generally) are famous for supporting unsuccessful candidates: George H.W. Bush in 1980, Bob Dole in 1988, Mike Huckabee in 2008, and Rick Santorum in 2012.

New Hampshire’s first-in-the-nation primary has seen its voters back Republicans Pat Buchanan in 1996 and John McCain in 2000.

Meanwhile, South Carolina had long touted its status of voting for the eventual nominee of the Republican Party (though it did support Ronald Reagan in its 1976 caucuses) – a status that was officially nullified in 2012 after Newt Gingrich defeated Mitt Romney by a dozen points that January.

Nonetheless, there are still a few states that do own bragging rights when it comes to picking Republican presidential nominees – and not all hold their contests at the end of the calendar after candidates have been unofficially crowned the nominee weeks prior.

Florida is the most notable of these states as it has tended to hold its primary while the GOP nomination was still in doubt – particularly in recent cycles.

(Primary dates from 1984 and 2004 are ignored in this analysis as incumbent Republican presidents did not face bona fide opposition in those cycles).

Along the way, Florida Republicans narrowly backed Gerald Ford over Ronald Reagan in 1976 by 5.6 points, John McCain over Mitt Romney in 2008 by 5.0 points, and Romney over Gingrich in 2012 by 14.5 points.

Illinois, meanwhile, has generally held its primary during the third week of March during this period, with the exception of 2008 when it moved up to Super Tuesday on February 5th.

Illinois gave Reagan an important 13-point victory over its home-state Congressman John Anderson in 1980 as well as helped to deliver knock-out blows to Romney in 2008 (by decisively backing McCain) and Santorum in 2012 (with Romney winning by 11.7 points).

Since 1976, Maryland, Wisconsin, and New York have held contests toward the front and back ends of the primary season.

The narrowest victory by the eventual GOP nominee in the Old Line State came in 1980 when Reagan edged Bush by seven points with 48 percent of the vote.

The Badger State held fairly competitive GOP primaries three times during this period under analysis: Reagan beat Ford by 11 points in 1976, Reagan defeated Bush by 10 points in 1980, and Romney nipped Santorum by seven points in 2012.

The Bush-McCain matchup in 2000 was competitive with the former winning by 7.6 points.

The Empire State, however, did not hold Republican presidential preference primaries (a direct vote for a specific candidate, or delegate committed to a specific candidate) until 1996. Prior to that, voters cast their ballots for delegates without their presidential candidate preference listed. (Ultimately, New York delegates backed the eventual GOP nominee during each of these cycles).

The remaining states of Kentucky, New Jersey, Ohio, and Oregon have generally held their primaries near the back end of the primary season. (With exceptions for Kentucky in 1988, New Jersey in 2008, and Ohio in 2000 and 2012).

Competitive races were held in Kentucky and Oregon in 1976 (with Ford defeating Reagan by four points in each) and Ohio in 2012 (with Romney beating Santorum by one point).

New Jersey has not yet hosted a competitive race.

Note: New Mexico has voted for the eventual GOP nominee in primaries for each cycle since 1980, but supported Reagan in its caucuses in 1976.

There have been 17 states that have backed one losing GOP candidate in a primary over the last 10 cycles:

● California, Idaho, Indiana, Montana, Nebraska, North Carolina, and Texas: Reagan over Ford in 1976
● Pennsylvania: Bush over Reagan in 1980
● Delaware: Steve Forbes over Dole in 1996
● Rhode Island and Vermont: McCain over Bush in 2000
● Utah: Romney over McCain in 2008
● West Virginia: Huckabee over McCain in 2008
● Mississippi, Missouri, and Oklahoma: Santorum over Romney in 2012
● South Carolina: Gingrich over Romney in 2012

Seven states have voted for losing Republican candidates in primaries twice since 1976:

Note: Arizona also backed Reagan in its 1976 caucuses. Louisiana caucus-goers supported Reagan in 1976 and Buchanan in 1996.

Of the remaining dozen states that have exclusively or frequently utilized the caucus system to select GOP nominees since 1976, all have backed a losing candidate at least once:

Combining primaries and caucuses, Iowa and Louisiana are tied for the largest number of cycles supporting a losing Republican presidential candidate since 1976 at four cycles each. 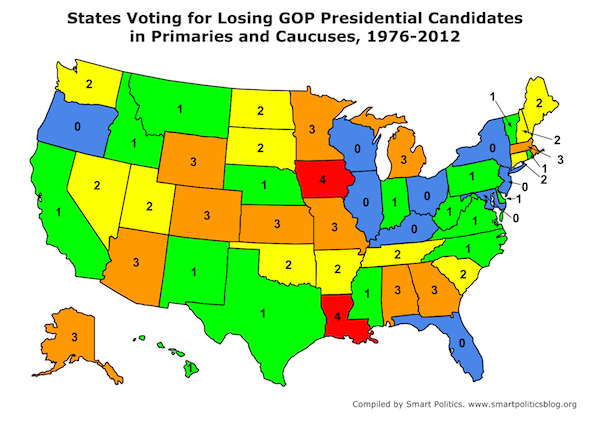