North Carolina has hosted the most competitive races for the U.S. Senate over the last quarter-century with Colorado, New Jersey, Missouri, Pennsylvania, and Minnesota close behind 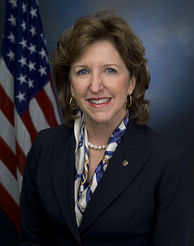 Democrats face an uphill battle to take back the U.S. Senate in 2016 and, unlike the GOP in 2014, they will not have the advantage of multiple open seat opportunities to reach their goal with only Florida and Indiana opening up thus far.

The party expects to be competitive in Florida along with states like Illinois, New Hampshire, Pennsylvania, and Wisconsin with leaders trying to coax former U.S. Senator Kay Hagan to challenge two-term GOP incumbent Richard Burr next year in North Carolina to add to that list.

Hagan is being characterized as the best – and only – hope for the party in 2016 to win the seat.

Hagan lost her seat last November to Thom Tillis by 1.6 points – the second closest race in the nation in 2014 behind Mark Warner’s 0.8-point win over Ed Gillespie in Virginia.

If Democrats are to believed that Hagan is their first, second, and third choice, a 2016 race without the former U.S. Senator means North Carolina will likely face its biggest blow-out race for the chamber in more than 40 years.

Moreover, it would put the brakes on a long string of competitive races the likes of which no other state has seen over the last quarter-century.

Smart Politics examined the 450+ U.S. Senate elections conducted since 1990 and found that North Carolina has hosted the most competitive races to the chamber with an average victory margin of 6.1 points and the largest number of contests decided by single-digits (eight of nine elections).

Since 1990, there have been 457 general and special elections to the U.S. Senate with each state holding between eight and 11 such contests.

North Carolina leads the nation with an average margin of victory of just 6.1 points across its nine elections to the chamber during this span.

While last year’s Tillis vs. Hagan matchup was the closest in the state during this period, North Carolina U.S. Senate races have consistently offered match-ups between fairly evenly matched opponents:

● 2004: Bowles ran in back-to-back cycles but lost again in an open seat race, this time to U.S. Representative Richard Burr by 4.6 points

The Tar Heel State’s proclivity to produce competitive races actually extends well before 1990 with 13 of its 14 U.S. Senate elections decided by single-digits since 1978.

Following North Carolina are five other states which have hosted U.S. Senate races with an average victory margin of less than 10 points over the last quarter-century.

Colorado boasts the second lowest mark in the nation at 8.8 points, followed by New Jersey at 9.6 points, Missouri and Pennsylvania tied for fourth at 9.8 points, and Minnesota at 9.9 points.

The most notable close elections in these states during the last 25 years are:

Rounding out the Top 10 states are Nevada with an average victory margin of 10.4 points, Washington at 11.4 points, Kentucky at 12.0 points, and Oregon at 13.4 points.

Most of these Top 10 states will hold elections to the U.S. Senate in 2016 (all except Minnesota and New Jersey) with particularly competitive races expected in Colorado, Nevada, and Pennsylvania.

Although they have been quintessential battleground states in presidential elections in recent cycles, Florida (19.6 points), Iowa (23.6 points), and New Mexico (24.8 points) have been average at best in serving up competitive U.S. Senate races.

Wyoming, meanwhile, has crowned its U.S. Senators by the widest of margins with its 10 contests since 1990 decided by an average of 40.4 points.

The margin of victory has dipped below the 25-point mark just twice in the Equality State during this period: Craig Thomas’s 19.6-point win over Mike Sullivan in 1994 and Mike Enzi’s 11.9-point win over Kathy Karpan in 1996. 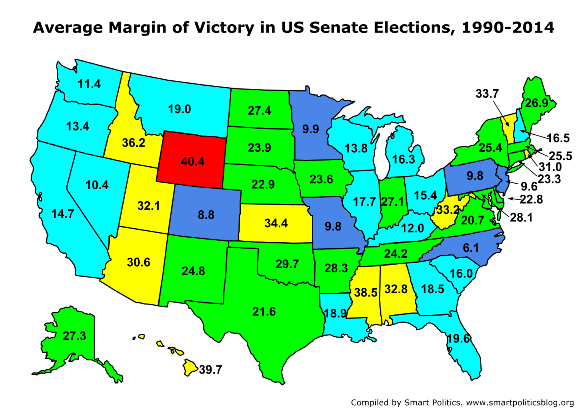 The average victory margin for the 457 U.S. Senate contests conducted across all 50 states since 1990 is 22.6 points.

North Carolina also leads the way by this measure with victory margins of less than 10 points in eight of its nine races (89 percent).

Colorado, Georgia, and Virginia are next at 67 percent followed by Georgia at 60 percent, Missouri, New Hampshire, and Pennsylvania at 56 percent, and Nevada, New Jersey, Oregon, and Wisconsin at 50 percent.

Alaska owns the current mark of four consecutive U.S. Senate races with a victory margin of less than 10 points.

During this 25-year span, nine states have failed to host even one U.S. Senate race that was decided by single-digits: Delaware, Idaho, Kansas, Maryland, Oklahoma, Texas, Utah, West Virginia, and Wyoming.

The state with the longest competitive U.S. Senate race drought is Maryland, which last saw a race for the nation’s upper legislative chamber decided by single digits 45 years ago in 1970 when GOPer John Beall defeated incumbent Joseph Tydings by 2.6 points.