One of the varied reasons given by (at times defensive) political observers and prognosticators as to the continued success of Donald Trump since he launched his 2016 presidential campaign in mid-June is that the GOP electorate is purportedly backing him at this point in the campaign in large part due to name recognition and celebrity status.

However, with every week that goes by with Trump at the top of the heap of the Republican field and one extremely high profile debate already under his belt, that argument seems to hold less and less water.

To the extent that Trump’s celebrity and pop culture status continues to drive his numbers, the remaining 16 candidates certainly have a deep well out of which to eventually climb.

To be sure, Trump entered the 2016 race as the most famous of the 17 men and women seeking the GOP nomination, and this report examines one measure that highlights the discrepancy between his celebrity and pop culture footprint and those of his rivals.

Smart Politics examined the frequency with which the 17 Republican candidates running for president in 2016 have been used on Jeopardy! as either clues or answers and found that Donald Trump has been mentioned on the show 59 times – three dozen times more than his nearest rival and more than 13 candidates combined.

One of the most successful televised game shows over the last three decades, Jeopardy! provides a useful snapshot of the extent to which politicians, entertainers, and other news makers enter and perhaps leave the pop culture consciousness.

A search through the Jeopardy! Archive yielded 59 mentions of Trump on the program (29 as a Jeopardy! clue and 30 as an answer) – by far the most in the GOP field.

The names of Ben Carson, Jim Gilmore, and John Kasich have not yet come up on the program. 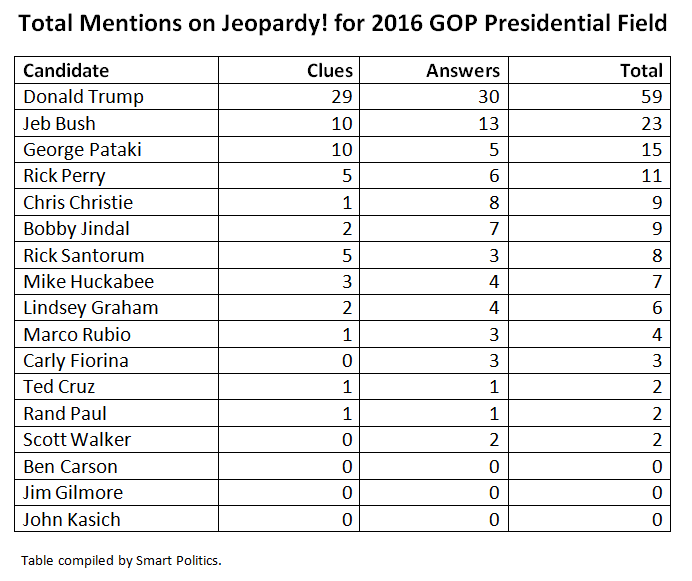 The first time the popular game show mentioned Trump was on November 21, 1996 – the earliest debut of any 2016 GOP candidate – when his name was the answer to the following clue:

ON THE INTERNET $300: This entrepreneur’s Taj Mahal & Castle have their own web pages

Trump beat Rick Santorum by one day with the former Pennsylvania U.S. Senator coming up on the November 22, 1996 show: 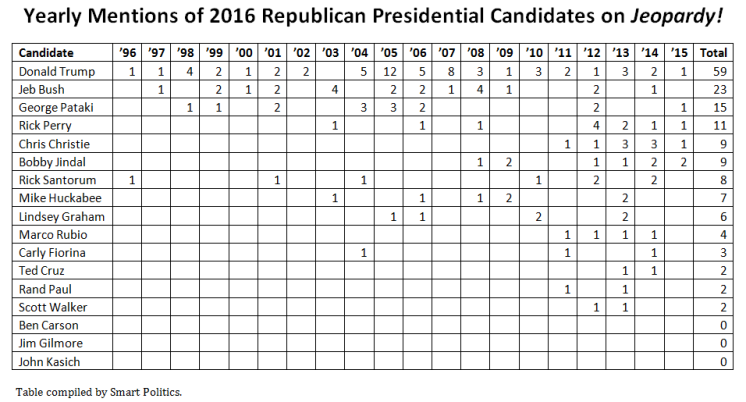 Trump is one of five Republican contenders who have been mentioned on the game show this year along with Christie, Jindal, Pataki, and Perry.

Jindal (March 27, 2015) ASIAN AMERICANS $1200: The son of immigrants from India, this state governor got an Ivy League education at Brown University

Trump (March 30, 2015) BOTTLES OF WATER $600: The “Ice Spring Water” from this NYC real estate guy must be okay as he wouldn’t put his name on just anything

The New York real estate mogul is so famous, that Jeopardy! made him a category on two of its programs.

On May 5, 2005 the category “Donald Trump” yielded these five clues:

Two years later, on May 14, 2007, the category “Put It On Donald Trump’s Bill” appeared with these clues:

Overall, Trump has been used by Jeopardy! to highlight several aspects of his life such as…

(June 2, 2006) POTPOURRI $400: Donald Trump’s rather unique hairstyle has been called a “pompad-over”, a combination of pompadour & this [a comb-over]

And his business ventures:

Of course, Jeopardy! is only one measure of a public figure’s cultural footprint and the show is by no means an accurate gauge for high or low poll numbers in the 2016 campaign.

For example, Pataki (15) and Perry (11) rank third and fourth in total number of mentions on the show among the 2016 candidates but both have been registering around one percent in national polling in recent weeks.

Meanwhile, Carson currently ranks second in national polling in the 2016 race but has never been used as a clue or answer on the program.

Beyond Trump, here is a sampling of some of the instances in which other 2016 GOP presidential candidates have been mentioned on Jeopardy!

Bush (October 9, 2008) BROTHERS & SISTERS $600: These 2 brothers, sons of a president, were given the Secret Service code names Tumbler & Tripper

Christie (January 9, 2014) REDUNDANT SOUNDING NAMES $800: He recently tweeted, “At 50 yrs old and the governor of NJ, I’m still trying to win over my mother-in-law”

Jindal (February 13, 2014) STATE GOVERNORS $2000: Born with the Indian name Piyush, this Louisiana governor wanted to be called Bobby after Bobby on “The Brady Bunch”

Perry (September 26, 2012) IN THE POLITICAL ARENA $400: He supported Al Gore’s 1988 presidential campaign; now he’s governor of Texas & his views have changed a bit

Santorum (May 11, 2010) A PRO BONO CATEGORY $800: Republican Senator Rick Santorum once said, “Bono understands his issues better than 99% of members of” this [Congress]

Walker: (October 23, 2013) FARTHER LEFT THAN BARACK OBAMA $1600: You may recall this governor hanging with the president–actually, in 2012, Wisconsin did not

There is, however, one advantage Bush currently holds over Trump on the Jeopardy! scoreboard.

Bush has the distinction of being the only candidate running for the Republican nomination who was part of a “Final Jeopardy” clue or answer: