Montana has voted in concert with the region overall at a higher rate than any other Western state; Hawaii has done so the least 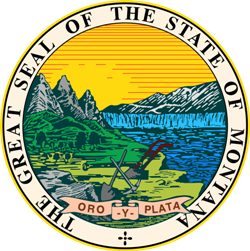 Last month Smart Politics crowned Iowa as the most Midwestern state in presidential elections – voting for the same presidential nominee as the region’s other 11 states a region-best 76 percent time since statehood.

Next Smart Politics looks to the youngest region of the country – the West – where two states have voted in presidential elections for just over half a century and two others for only 100 years.

This, in effect, is a search for a regional bellwether – a Western state that has best expressed the political voice of the region in presidential elections and voted more like the region as a whole than any other.

Smart Politics examined the 387 elections for president conducted across the 13 Western states since 1852 and found that Montana has voted in concert with the rest of the region 79.5 percent of the time – best in the West – with Hawaii lagging far behind in last at 42.9 percent.

This study examined which presidential nominee prevailed in each of the 13 Western states dating back to 1852 when the first such state, California, voted in a presidential election. [The West is defined as Alaska, Arizona, California, Colorado, Hawaii, Idaho, Montana, Nevada, New Mexico, Oregon, Utah, Washington, and Wyoming].

The voting preference of each state was coded and then a matchup comparison was conducted between a given state and each of the 12 others across the subsequent 40+ cycles to generate a ‘regional voting score’ reflecting a state’s interstate voting cohesion. In the analysis below, the numerator is the sum of state-on-state matchups in which both voted for the same presidential nominee and the denominator is the total number of such matchups in the region since statehood.

Overall, the nation’s 13 Western states have voted for the same presidential nominee in 2,902 of 3,916 state-by-state matchups, or 74.1 percent of the time.

That makes the region a bit more politically cohesive over the decades than the Midwest, where its states voted in alignment 71.2 percent of the time across 4,970 state-by-state matchups.

In general, the West has voted with a decided Republican tilt over the decades. Western states have cast Electoral College votes for the GOP nominee in 234 of 387 races (60.5 percent) with the Democratic nominee carrying Western states 148 times (38.2 percent) and third party candidates claiming victory five times (1.3 percent).

Going back to 1860 – the first presidential cycle with two or more Western states – the region as a whole has voted with one voice in a remarkable 16 of 39 election cycles, or 41.0 percent of the time.

Montana: The Most Western State?

The Western state that has most consistently backed the presidential nominee of its regional neighbors is Montana.

The Treasure State has cast its Electoral College votes for the same presidential nominee as the other dozen Western states 260 times while voting for a different nominee 67 times, for a 79.5 percent ‘regional voting score.’

That high score is reflected in the fact that, over the decades, Montanans have overwhelmingly chosen a presidential nominee who was the choice of the majority of the states in the region – doing so in 27 of 31 cycles since statehood (87.1 percent).

However, Montana was by no means a regional outlier in those four cycles, with its choice for president one state shy of carrying a majority of states in the West each time (Bryan carried four of nine Western states and Dole, McCain, and Romney all carried six of 13).

Overall, Montana has voted for 20 Republican nominees and 11 Democrats since statehood.

While Montana has the highest Western voter cohesion score in presidential elections, six other states have scores of at least 75 percent. 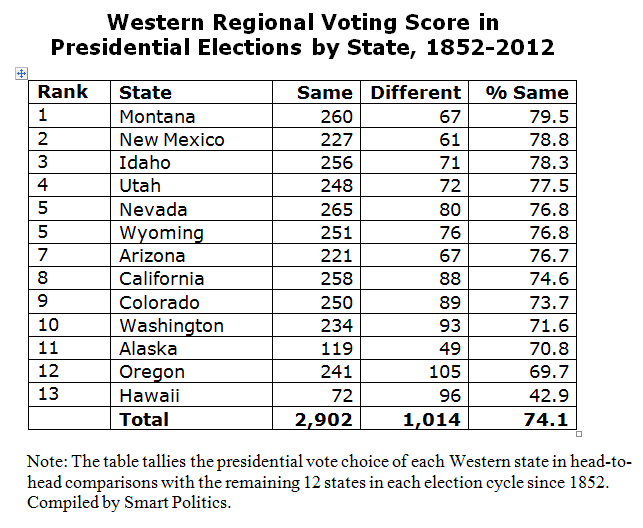 Hawaii – Alone on an Island

That leaves Hawaii – the true political outlier in the West.

Hawaii has voted for the same nominee as other states in the region in just 72 of 168 matchups, or 42.9 percent of the time since its first vote for president in 1960.

That low correlation with its Western neighbors is evidenced by the Aloha State backing nearly all Democratic nominees while the rest of the region has overwhelming voted Republican.

Meanwhile, GOP nominees have carried the remaining dozen Western states in 120 of 168 elections since 1960 (71.4 percent).

Look for a follow-up report this week with Part 4 in this series – detailing Western sister states in presidential elections.