Earlier this summer, Smart Politics issued a report demonstrating how presidential electoral maps are currently in a historic holding pattern.

The 2012 presidential map recorded the lowest ever rate of statewide cycle-to-cycle partisan change in the two-party era and the nation is also currently in the midst of its lowest rates of change in its electoral maps across the last three-, four-, five-, six-, seven-, eight-, and nine-cycle periods.

With historically few states flipping back and forth between their partisan preferences in presidential races, political parties are starting to rack up an impressive array of statewide winning streaks as a result.

Thirty-six of them, to be precise.

Smart Politics examined the 2,000 statewide elections for president conducted since 1828 and found that 36 states are currently in the midst of their longest ever Democratic or Republican winning streaks with the GOP enjoying its best ever runs in 20 states and Democrats at peak levels in 16 others.

While a few of these states are often considered bona fide (Pennsylvania, Wisconsin) or quasi- (Michigan, Oregon, Washington) battlegrounds each cycle, a substantial number of Electoral College votes are currently held in states where one of the two major parties is enjoying unprecedented success at the ballot box.

For the GOP, these 20 reliably GOP states take 166 electoral votes off the table each cycle while the 16 Democratic states have given its nominees 209 electoral votes on which they can count (212 if one counts the District of Columbia which has never voted for a Republican nominee).

At the top of the leader board are nine states which have voted Republican for 12 consecutive cycles dating back to Richard Nixon in 1968: Alaska, Idaho, Kansas, Nebraska, North Dakota, Oklahoma, South Dakota, Utah, and Wyoming.

These states currently rank tied for 11th on the all-time GOP presidential victory streak list, and they can leap into a tie for second place if Republican nominees win there again in 2016 and 2020.

Four states have set state party records by voting for the GOP presidential nominee in nine consecutive cycles since 1980 (Alabama, Mississippi, South Carolina, Texas), Georgia has done so for a record five times since 1996, and six others have a record four-cycle Republican streak (Arkansas, Kentucky, Louisiana, Missouri, Tennessee, and West Virginia).

Note: Nineteen of these 20 GOP winning streaks above are outright records for the party in each state. In West Virginia, Republican nominees also won four elections in a row from 1896 to 1908 and 1916 to 1928. 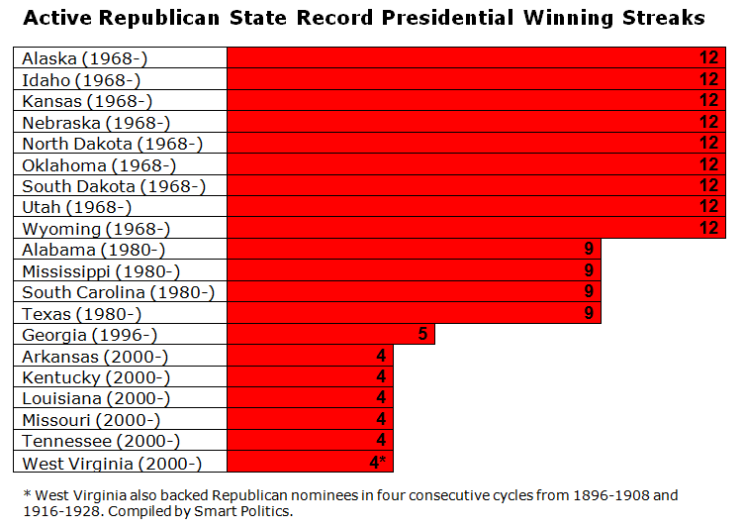 The longest current Democratic streak is in Minnesota which has voted for Democrats in each of the last 10 cycles since Jimmy Carter in 1976.

In 2012, Minnesota became the first state outside the South where Democrats have won 10 consecutive presidential elections since the founding of the party in 1828. 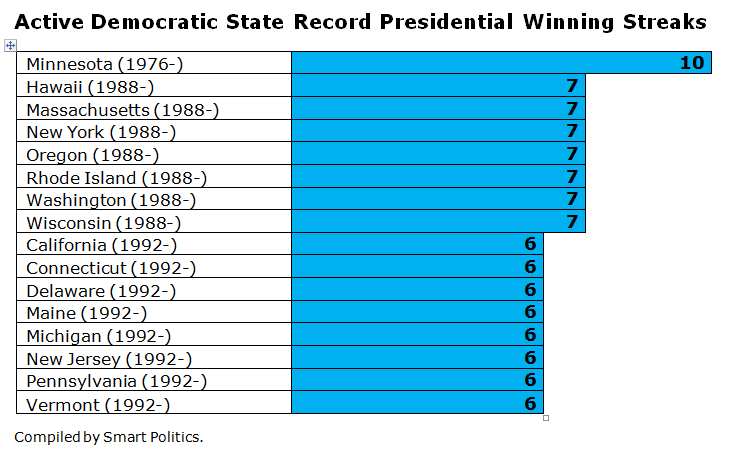 Records Are Not Broken, But Shattered

Not only have Republicans and Democrats set party high water marks in three-dozen states, but records have been smashed in many of them: 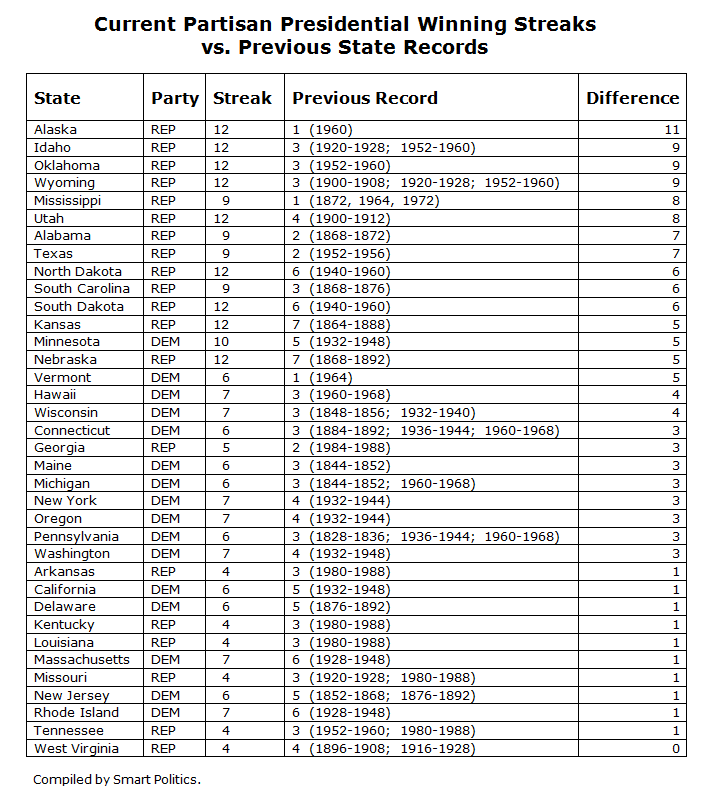 Of the 14 states where Democrats or Republicans currently do not hold a party-best winning streak in presidential races, two could tie marks in the 2016 cycle: Maryland and Ohio.

Democratic nominees currently own a six-cycle winning streak in Maryland dating back to Bill Clinton’s first win in 1992 – just one shy of the party’s best mark of seven recorded from 1868 through 1892.

With the party claiming Maryland’s electoral votes by double-digit margin victories in all six cycles since 1992, it would appear Democrats have a near lock on tying the party’s mark in the Old Line State in 15 months.

After Barack Obama’s victories in Ohio in 2008 and 2012, Democrats have now won back-to-back presidential elections in the Buckeye State for just the sixth time in state history and are now just one win short of matching their record of three in a row set by Franklin Roosevelt from 1932 to 1940.

Unlike Maryland, Democratic wins in the Buckeye State have historically been close shaves. Of the 16 victories by Democratic nominees in state history, 13 were decided by single digits including each of the last five (1976, 1992, 1996, 2008, 2012).