Even with a strong GOP U.S. Senate challenger, a win by the 2016 Democratic presidential nominee at the top of the ticket should seal the deal for a second Blumenthal term 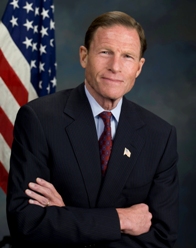 Blumenthal, who kept the Nutmeg State’s Class III U.S. Senate seat in the Democratic column for a ninth consecutive cycle since 1962 with an 11.9-point win over Linda McMahon in 2010, has already seen one Republican challenger enter the race – financial adviser and former Olympian August Wolf.

Kudlow has repeatedly made declarations of a contingent candidacy in recent weeks as increased focus is paid to how many and which Democrats will back the Iran deal made by their party’s standard-bearer.

Blumenthal has a long history in elected office in Connecticut, having previously served three terms in the state house in the 1980s and a record five terms as the state’s Attorney General from 1991 to 2011.

But if one vote could launch an opposing candidacy, could it also sink the senior senator from Connecticut? Not likely.

For starters, the odds are quite good that the top of the ticket vote for president will be a much more reliable tell to determine whether or not Blumenthal returns to the chamber in 2017.

In the direct election era, Connecticut voters have aligned their vote for U.S. Senate with the party of their choice for president in 16 out of 19 contests, or 84 percent of the time – one of the Top 10 highest rates in the nation (Wyoming, Kansas, Utah, and North Carolina top the list at 90+ percent).

That bodes well for Blumenthal, as Connecticut has cast its Electoral College votes for the Democratic presidential nominee in six consecutive cycles – the longest such streak for the party in state history.

The only three instances in which voters split their presidential and U.S. Senate ballots came at the expense of GOP U.S. Senate candidates:

However, as might be expected, Connecticut electoral history has shown that first-term U.S. Senators are a bit more vulnerable on the margins than members of the chamber with more experience.

Since the state’s first direct election in 1914, a total of 11 of 16 first-term U.S. Senators from Connecticut won reelection, or 68 percent.

Meanwhile, members in their second term or longer who sought reelection were victorious in 10 out of 13 campaigns, or 77 percent.

First-term U.S. Senators who were not so fortunate were:

As of now, with Kudlow not officially in the race, all prognosticators view Connecticut’s U.S. Senate race as solidly Democratic.