Half of the remaining presidential candidates still do not have campaign merchandise available for purchase on their websites, and all but one are struggling mightily in the polls 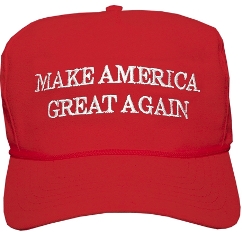 One of the iconic symbols of the 2016 presidential campaign to date has been GOP front runner Donald Trump’s red “Make America Great Again” cap, which the businessman has worn to several events.

That cap – along with other apparel and merchandise – is available for purchase at Trump’s campaign website for $25.

Trump is not alone in offering a variety of items for sale that serve the dual purposes of both raising money and also generating advertising when such t-shirts, caps, or hand bags are worn by the candidate’s supporters.

However, not all campaigns are yet to the point where they have been financially able to invest in stocking such items for sale. In fact, half of the field is swag-free at the moment.

Of these 10 candidates, Fiorina seems the most likely to graduate to swag-level status.

Two well-reviewed debate performances have vaulted the former business executive to third place in recent national polling and no doubt have generated an uptick in campaign receipts. That money can be used to manufacture campaign merchandise.

As for the other nine candidates without merchandise for sale, all but Governor Christie are averaging one percent or less in national polling – numbers that are not likely to fast track campaign swag any time soon.

It should be noted that on his campaign website Chafee links to Amazon for supporters to purchase his 2010 book Against the Tide.

Meanwhile, Jim Webb’s campaign website does have a ‘shop’ page with a shopping cart icon – however, there is nothing currently available in the store for purchase.

However, simply because a presidential hopeful offers campaign merchandise for sale does not mean that candidate is doing swimmingly in the polls.

In fact, each of the first two candidates to drop out of the 2016 sweepstakes – Rick Perry and Scott Walker – both had items for sale on their websites.

Governor Walker, meanwhile, has taken down his store and nearly all of his campaign web pages – although he will still gladly take donations.

As for the 10 remaining campaigns that do offer merchandise for sale, Rand Paul and Hillary Clinton offer the largest selections.

But it is Senator Paul who has taken campaign merchandising to a new level.

Paul is one of four candidates to offer beer koozies along with Clinton, Cruz, and Trump.

And, for the very young, Bush, Clinton, Cruz, and Trump all offer onesies in their stores.

* Denotes items for sale on Scott Walker’s website prior to his withdrawal from the campaign. Through September 24, 2015. Compiled by Smart Politics.