Two pairs of floor leaders have come from the same state Congressional delegation, but never the House Speaker and Minority Leader 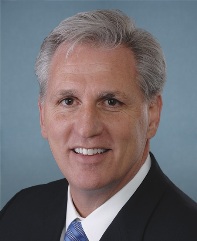 On Monday, Smart Politics reported how an upset victory by Utah’s Jason Chaffetz over California’s Kevin McCarthy for House Speaker would create the rarity of one state being able to claim two legislators in the line of presidential succession, with Orrin Hatch the U.S. Senate’s current president pro tempore.

As rare as that feat would be, a historic first would be written into the record books of the U.S. House if McCarthy is victorious as expected.

In that instance, it would mark the first time in the history of the House of Representatives that the Speaker and Minority Leader hailed from the same state.

The roles of Majority and Minority Leaders were not formalized until the 56th Congress in 1899 when New York Republican Sereno Payne and Tennessee Democrat James Richardson were elected to these positions by their respective caucuses.

While the institutional role of Speaker is not simply a partisan one (like that of Majority or Minority Leader), it also functions as the leader of the majority party.

Since 1899 there have been 20 House Speakers and 17 minority leaders – but never have both represented congressional districts in the same state. That, of course, will change with a McCarthy victory in late October.

When Congressman McCarthy was promoted by his caucus from Majority Whip to Majority Leader after Eric Cantor’s stunning primary defeat and subsequent resignation from Congress in the summer of 2014, it marked just the second time the House Majority and Minority (Nancy Pelosi) Leaders came from the same state.

At that time McCormack joined eight-term Massachusetts Republican Joseph Martin who had been elected Minority Leader by the GOP caucus earlier in the 76th Congress.

[Note: For a little more than two weeks during the 74th Congress from June 5-20, 1936 seven-term New York Democrat John O’Connor served as acting Majority Leader following the death of Speaker Joseph Byrns of Tennessee. At that time, 11-term New York Republican Bertrand Snell was in his third term as Minority Leader].

As partisan control of the chamber alternated between the Democrats and Republicans after the Elections of 1946, 1948, 1952, and 1954, McCormack and Martin alternately held the Majority/Minority Leader posts with Indiana GOPer Charles Halleck and Texas Democrat Sam Rayburn (with the former pairing serving as floor leaders while Rayburn was Speaker and the latter pair while Martin was Speaker).

Overall, Massachusetts claimed both leadership positions for eight Congresses between late September 1940 through the end of the 85th Congress in 1958 at which point the GOP elected Halleck as its floor leader for three consecutive terms.

The two partisan leadership posts would be held by U.S. Representatives from different states until August 2014 when McCarthy was elected Majority Leader, joining Nancy Pelosi who had held the position of Minority Leader following the GOP tsunami of 2010.

If McCarthy wins the vote for Speaker later this month it was also mark the first time U.S. Representatives from the Western region held both the speakership and Minority Leader posts.