Fourteen ex-presidents have been mentioned over 100 times collectively this debate season with two former commanders in chief accounting for more than two-thirds of them. Any guesses? 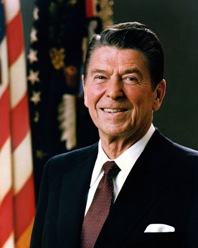 While the presidency of Barack Obama has framed much of the five presidential debates conducted thus far this cycle – receiving mostly barbs from Republicans and cautious praise from Democrats – many of Obama’s predecessors have also been a frequent topic of discussion.

Sometimes candidates attempt to compare themselves favorably to past presidents who are popular with their base as well as differentiate their candidacies from those who are not.

All told, the names of more than a dozen ex-presidents have been mentioned through three prime time and two ‘undercard’ debates, although two in particular have overwhelmingly been the most frequently discussed.

A Smart Politics analysis finds that the names of 14 ex-presidents have been invoked a total of 109 times this presidential debate season with Ronald Reagan (45) and George W. Bush (30) accounting for more than two-thirds of them.

With two prime time plus two undercard debates already in the GOP column and just one for the Democrats, it is not surprising Republican White House hopefuls have made the vast majority of references to ex-presidents thus far.

The 17 Republican candidates who have participated in at least one debate have mentioned ex-presidents a total of 98 times with the five Democrats doing so just 11 times in their debut performance last Tuesday in Las Vegas.

Although his numbers are inflated in part due to the fact that the second set of Republican debates were held at his presidential library in Simi Valley, California, Ronald Reagan is by far and away the leader in the ex-president clubhouse with 45 mentions to date – almost all of which were positive.

As expected, the laudatory comments toward Reagan have poured in from the GOP field:

“One of the things that made Ronald Reagan a great president is that he understood that America was a unique nation, unlike any other that had existed throughout human history.” – Marco Rubio (Simi Valley)

“Ronald Reagan was a master at understanding that a pinnacle nation has to be a nation that leads.” – Ben Carson (Simi Valley)

“It is worth emphasizing that Iran released our hostages in 1981 the day Ronald Reagan was sworn into office.” – Ted Cruz (Cleveland)

“Do you think Putin would be in the Ukraine or Syria today if Ronald Reagan were president? No.” – Lindsey Graham (Simi Valley)

“Do we depend on proven conservative principles like Ronald Reagan did, or do we turn this over to a narcissist who only believes in himself?” – Bobby Jindal (Simi Valley)

Candidates have also attempted to demonstrate a personal connection to Reagan – drawing as straight a line as they can between the 40th president and themselves:

“I was a child of Ronald Reagan.” – Rick Santorum (Cleveland)

“By the way, I think I actually flew on this plane with Ronald Reagan when I was a congressman, and his goals, and mine, really much — are pretty much the same.” – John Kasich (Simi Valley)

“Our plan is based on the Ronald Reagan tax cuts of 1986.” – Scott Walker (Simi Valley)

“I’m the only candidate tonight who served in the military while Ronald Reagan was our president and our commander in chief. It was one of the highlights of my life.” – Lindsey Graham (Simi Valley)

“If I were president, I would try to be one who says, you know what, I’m a Reagan Conservative.” – Rand Paul (Simi Valley)

“I will be the Ronald Reagan if I can find a Tip O’Neill.” – Lindsey Graham (Cleveland)

The only Democrat to mention Reagan on Tuesday was Jim Webb while selling his record of public service – he was Secretary of the Navy during the Reagan administration.

As for the nation’s other recent ex-presidents, George W. Bush has garnered 30 mentions in the debates with 13 for Bill Clinton and six for George H.W. Bush.

The 43rd President was, of course, attacked at the Democratic debate this week:

“Well, first of all, let’s remember where we were when Bush left office. We were losing 800,000 jobs a month.” – Bernie Sanders

“But let me just say about income inequality. We’ve had a lot of talk over the last few minutes, hours, or tens of minutes, but no one is saying how we’re going to fix it. And it all started with the Bush tax cuts that favored the wealthy.” – Lincoln Chafee

Bush has also received some criticism during the Republican debates:

“The last number of months of his brother’s administration were a catastrophe.” – Donald Trump, to Jeb Bush (Cleveland)

“George W. Bush appointed John Roberts, and let me give you the consequences of that. If, instead, the President Bush had appointed Edith Jones, and Mike Luttig, which is who I would have appointed, Obamacare would have been struck down three years ago, and the marriage laws of all 50 states would be on the books.” – Ted Cruz (Simi Valley)

Although his brother Jeb Bush has chosen to defend him on the debate stage:

“As it relates to my brother, there’s one thing I know for sure. He kept us safe.” – Jeb Bush (Simi Valley)

Among the presidents who served prior to Reagan, John Adams and John Kennedy lead the way with three mentions each this debate season.

Rand Paul invoked Adams at the Cleveland debate in a discussion of the Patriot Act:

In explaining why he’d put Abigail Adams on the $10 bill, Chris Christie stated:

“I think the Adams family has been shorted in the currency business. Our country wouldn’t be here without John Adams, and he would not have been able to do it without Abigail Adams, so, I’d put Abigail Adams on the bill.”

Though a Democrat, Kennedy also received good notices from the GOP field in the Simi Valley debate.

Ben Carson said he told George W. Bush to be “Kennedy-esque,” in moving the nation to be energy independent.

Mike Huckabee similarly cited the 35th President in a discussion on the importance of vaccines and rallying around a goal: “John Kennedy said, “we’ll go to the moon in a decade and bring a man back,” and we did it.”

The most famous (and highly rated) Republican president in history, Abraham Lincoln, has been mentioned just twice so far in the debates.

“It is not any more than Dred Scott was settled law to Abraham Lincoln, who, in his first inaugural address, said “it won’t stand.””

“Your brother — and your brother’s administration gave us Barack Obama, because it was such a disaster, those last three months, that Abraham Lincoln couldn’t have been elected.”

Thomas Jefferson: “If the court can just make a decision and we just all surrender to it, we have what Jefferson said was judicial tyranny.” – Mike Huckabee (Simi Valley)

James Madison: “It’s called “Marbury v. Madison.” The group in our constitutional democracy that interprets “The Constitution” as to what it means is the Supreme Court.” – Lindsey Graham (Simi Valley)

John Quincy Adams: “Whenever we go — and contrary to John Quincy Adams’ advice — “searching the world for monsters to destroy,” and when we use political might to take a — at the expense of democratic principle, we hurt ourselves.” – Martin O’Malley (Las Vegas)

Andrew Jackson: “Well, I wouldn’t change the $10 bill, I’d change the $20. I’d take Jackson off and I’d leave Alexander Hamilton right where he is as one of our Founding Fathers.” – Ted Cruz (Simi Valley)

Gerald Ford: “I met Ronald Reagan as a teenager, and my family, we’re big supporters of him when he ran against Gerald Ford.” – Rand Paul (Simi Valley) 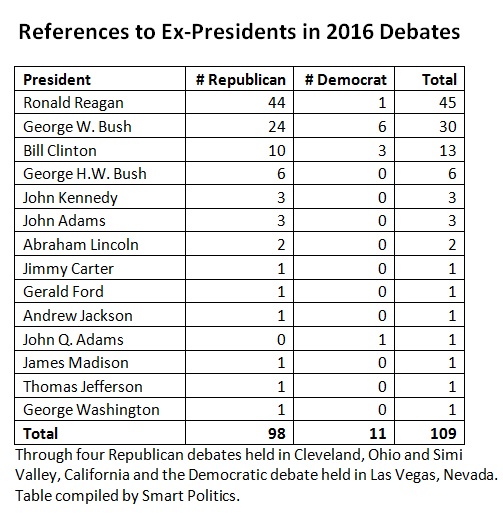 There are no guarantees Presidents Chester Arthur, William Henry Harrison, or Warren Harding will get shout-outs this debate season.

But with over 100 references to ex-presidents thus far and with at least nine more Republican debates scheduled and five more on the Democratic side, look forward to dozens more references to the familiar names mentioned above as well the likes of Franklin and Teddy Roosevelt, Lyndon Johnson, and Dwight Eisenhower.