In 2016, Jimmy Panetta could join six current members of the Golden State U.S. House delegation who were preceded in Congress by a family member 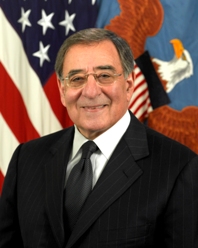 This is the fifth in a series of Smart Politics reports on ‘congressional royalty’ in the U.S. House of Representatives. Previous reports studied Florida, Michigan, Illinois, and Wyoming.

On Tuesday, Monterey County Deputy District Attorney Jimmy Panetta announced that he would run for Congress in 2016 for the 20th CD seat held by retiring 12-term Democrat Sam Farr.

Panetta is the son of former nine-term Democratic U.S. Representative Leon Panetta (pictured), who served in the chamber the state’s 16th and 17th Districts from 1977 to 1993 before resigning to work in the Clinton administration.

If elected, Panetta would join an already fair-sized number of California delegation members – currently five Democrats and one Republican – who were preceded in the U.S. House by a family member:

That number that was eight just three years ago, or 15 percent of California’s 53-member delegation with the addition of:

In general, it has become more common over the last few decades for Californians to elect U.S. House members with familial ties to the chamber.

Overall, 20 of the state’s 367 men and women to be elected to the chamber since statehood, or just five percent.

In addition to former House Speaker Pelosi, there are a few other notable names among the 20 California U.S. Representatives with legacy connections to Congress.

Meanwhile, Republican Barry Goldwater, Jr. served seven terms in U.S. House (1969-1983) all while his father, Barry Goldwater, Sr., was serving his third, fourth, and fifth terms in the U.S. Senate from Arizona.

The remaining 10 California U.S. House members on this list are:

Of these 20 Californians, just three overlapped in Congress with their familial predecessor.

On the U.S. Senate side, five of the 43 Californians elected or appointed to the chamber had a family member serve in Congress before them: