If Democrats hope to take back control of the U.S. Senate this decade, the 2016 cycle is most likely their only chance to do so.

As discussed earlier in the week at Smart Politics, the party has several opportunities for pick-ups – which might be realized even if their presidential candidate does not prevail at the top of the ticket.

However, in 2018, Democrats will be back on defense – with only eight Republican-held seats on the ballot that cycle, compared to 25 for the Democrats including the chamber’s two independents who caucus with the party. [As things currently stand heading into the 2016 elections, that is 54 percent of the 46 seats held by the Democratic caucus].

That leaves just Arizona (Jeff Flake) and Nevada (Dean Heller) for Democrats to have a reasonable chance at being competitive in three years.

The party will also have to contend with the ethically embattled Bob Menendez in New Jersey, should he decide to run for reelection.

To be sure, there will be at least a handful of retirements among those 33 U.S. Senators up for reelection in three years. [Orrin Hatch of Utah was the first to indicate the 116th Congress would be his last].

Over the last 22 election cycles since 1974 there has been an average of 6.4 retirements from the chamber and no less than three calling it a day in any given cycle.

But although each of these 33 U.S. Senators is still raking in money – all but three have netted more than $100,000 in campaign contributions through the first three quarters of this year – there is of course a wide range between colleagues as to how much funds are coming in and how much cash on hand each has for their next campaign.

Senator Corker of Tennessee has the most cash on hand through September of this year at $5.71 million – nearly $2 million more than his next closest Class I seat colleague (Vermont Independent Bernie Sanders at $3.94 million). 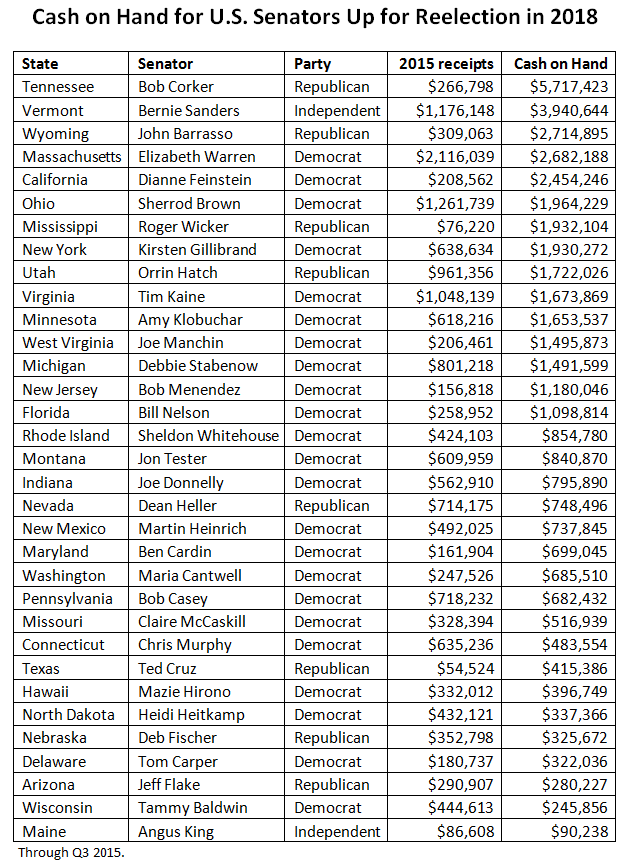 Of course, the amount of money a given U.S. Senator needs for a reelection bid varies greatly depending on a number of variables such as a) the presence of a bona fide primary challenger, b) the level of competitiveness of the seat in the general election and c) the media market costs in the state.