More than 160 guests have appeared with the First Lady since the president’s first State of the Union speech in 2010, but none from 12 states 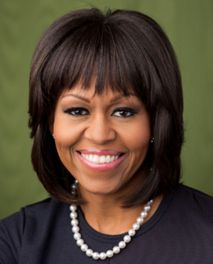 Barack Obama will give his seventh official State of the Union (SOTU) address on Tuesday evening with nearly two-dozen guests looking from the balcony with the First Lady.

Michelle Obama has invited 161 non-administration guests to join her across these seven SOTU addresses delivered by her husband dating back to 2010.

However, a Smart Politics examination of the past seven Michelle Obama guest lists finds there are still a dozen states that never saw one of their own sit alongside the First Lady.

Four of these states who never received an invitation were carried by President Obama in both cycles (Hawaii, Maine, New Hampshire, and Vermont) while the remaining eight states were carried by Republican nominees John McCain and Mitt Romney (Alabama, Arkansas, Idaho, Kansas, Louisiana, North Dakota, South Dakota, and Wyoming).

It is no secret that guests of the First Lady serve political purposes – with several specifically referenced each year as episodic examples that illustrate a particular policy position of the president during his address.

No doubt each of the 12 forgotten states could make an argument that they too have residents symbolizing important national stories, such as individuals from Louisiana who have recovered after Hurricane Katrina or those from North Dakota who have thrived in that state’s oil boom.

However, these aforementioned 12 states not to appear with the First Lady are among the lowest in population and collectively account for just 57 Electoral College votes.

By contrast, the heavily-populated State of California leads the way with 18 residents on Michelle Obama’s guest lists since President Obama’s first SOTU in 2010 including two this year: activist Ryan Reyes of San Bernardino and U.S. Air Force Staff Sergeant Spencer Stone of Sacramento. That accounts for more than 11 percent of the invited guests.

Arizona is next with 14 guests followed by Texas with 12 (including four this year), Washington D.C. with 11, Michigan and North Carolina with eight, Colorado, Illinois, and Virginia with seven, and Pennsylvania with six.

Overall, the First Lady has invited 108 guests in states won by President Obama during the previous election cycle (69 percent) and just 49 guests from those states carried by his opponents. [Four other guests were governmental officials or residents of U.S. territories].

However, not all heavily populated states have had a large presence at the president’s seven SOTU addresses.

Only three guests of the First Lady have come from New York and Ohio with four from Florida. 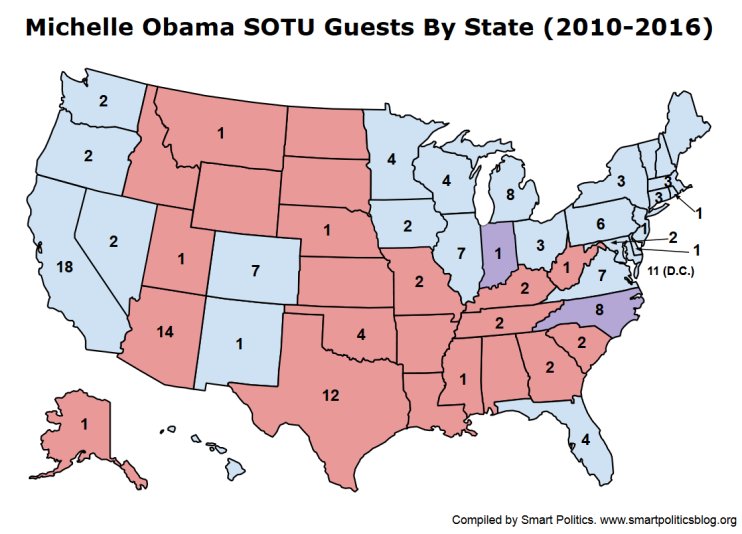 For the first time since the president’s first SOTU in 2010, no resident of North Carolina will watch the speech alongside the First Lady, ending a streak of six addresses in a row.

Californians have also been invited to six of Obama’s SOTU addresses with residents from Arizona, Colorado, Illinois, Michigan, Texas, and Virginia invited to five.

Only slightly more than half of the guests have been men (83) versus women (78).