If Vilsack leaves his post this year, Obama will become the first president since Ulysses Grant to serve two full terms without a single original cabinet appointee to last all eight years 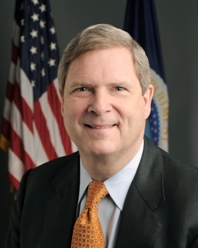 Tom Vilsack began his eighth year as U.S. Secretary of Agriculture this week – as he continues to rise on the list for all-time service in that post.

Perhaps it is fitting that an Iowan like Vilsack remains standing by his president, for it was in the Hawkeye State that Obama first turned heads with a victory in the 2008 caucuses – beating John Edwards and Hillary Clinton in a very competitive three-way race. [Note: Vilsack himself ran a short-lived campaign for the White House that cycle].

Vilsack currently ranks as the fifth longest serving Agriculture secretary in U.S. history of the 30 to serve in that position since it was created more than 130 years ago in 1885.

Houston’s predecessor, James Wilson, holds the all-time mark at 16 years of service as the head of the Department of Agriculture (5,843). Wilson was the fourth secretary in the position and served in the administrations of William McKinley, Teddy Roosevelt, William Taft, and Woodrow Wilson.

Despite Vilsack being the last original Obama cabinet member, the 44th President has had an array of long-serving cabinet heads during his two terms in office including three who have record-setting tenures.

Former Energy Secretary Steven Chu (2009-2013) exited with more days on the job than any of the 13 men and women to serve in the position since the department’s formation in 1977.

Former Secretary Eric Shinseki (2009-2014) lasted longer than any of eight heads of the Department of Veterans Affairs since its formation in 1989.

Finally, former Homeland Security Secretary Janet Napolitano (2009-2013) is the longest serving head of that department at 4 years, 7 months, 17 days, although just four secretaries have led that department since its creation in 2003.

Although falling short of the all-time record, Obama also had several other long-serving department heads:

Despite the long tenures listed above, if Vilsack does resign before the end of Obama’s term next January, he will become the first president since Ulysses Grant to serve two full terms without a single original appointee staying on board for the entirety of the presidency:

Note: Three holdovers from the Taft administration served a day before Wilson’s appointees took office in these departments.