As results trickle in on Monday evening from Iowa, political observers will be itching to make claims as early as possible as to how both the Democratic and Republican races are trending based on vote totals from a small sampling of areas around the state.

There is a good chance the ultimate winners of the caucuses will not be known until later in the evening, but if one is looking for a cheat sheet, there are a handful of counties which may give a sign as to how the Democratic race will shake out in the end.

A Smart Politics analysis of the last seven Iowa Democratic caucuses since 1980 finds that just 12 of the state’s 99 counties have backed the caucus’ statewide winner each cycle.

Although many of these races were not particularly competitive, at least one county did not give an outright plurality or majority to the statewide winner in each cycle except for Harkin in 1992, and counties have not backed the Iowa caucus winner outright 149 times collectively across the last seven cycles including 106 times in 2004 and 2008.

To be sure, even in cycles that had little drama for the Democrats, counties around the state could be found bucking the statewide trend.

All told, there have been just 12 counties that have had their finger on the pulse of the state as a whole across these last seven Democratic caucuses: Buchanan, Buena Vista, Carroll, Clayton, Clinton, Dubuque, Grundy, Jackson, Marshall, Muscatine, Plymouth, and Webster.

Polk, by far the state’s most heavily populated county, failed to vote for the winning Democratic candidate twice: in 1988 (Simon) and 2004 (Edwards).

These dozen counties are located most heavily in the east (Buchanan, Clayton, Clinton, Dubuque, Jackson, Muscatine) but also the central (Grundy, Marshall, Webster) and western (Buena Vista, Carroll, Plymouth) portion of the state. 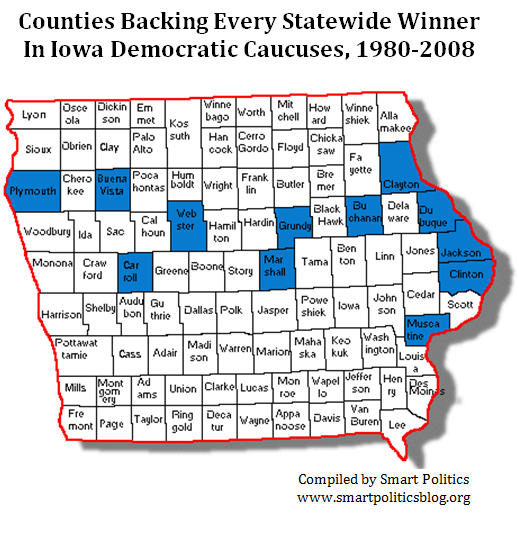 And which counties have gone rogue in the Democratic caucuses?

Since 1980, two counties have backed the winning candidate in only three of the seven cycles: Adair and Jefferson.

And there is this additional note: of the 12 counties that have a perfect track record on the Democratic side since 1980 – two are also unblemished in backing the Republican caucus winner since 1988.

Buchanan and Grundy are two of 27 counties which are five-for-five in supporting the GOP nominee since Bob Dole’s first victory in the Hawkeye State 28 years ago.

Details on the remaining Republican bellwether counties will be revealed in the next Smart Politics report.