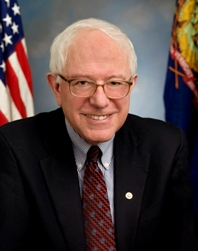 Not only did ‘the outsiders’ score important victories in the New Hampshire primaries on Tuesday, but they did so in near historic fashion.

On the Democratic side, Bernie Sanders ran up the score over Hillary Clinton by a margin that had only been seen once before in a contested primary – and only then in a race with just one established politician.

Sanders swept all 10 counties in the state on Tuesday and recorded 60.4 percent of the vote – more than 22 points ahead of Clinton’s 38 percent.

The only other candidate who recorded a more decisive victory for the party in the state was Senator Kennedy in 1960 when he won 85.2 percent of the vote against pen company executive Paul Fisher – a margin of 71.7 points.

Each of the other 11 contested Democratic primaries in New Hampshire were more competitive than Sanders’ blow-out win over Clinton with an average victory margin of just 8.5 points:

The 1952 cycle marked the first presidential primary in the state in which candidate voter preference options appeared on the ballot after the passage of a 1949 state law.