Major media outlets cannot agree on any of the delegate counts for the top three GOP candidates, nor the allotment from 11 states that have voted thus far

With 20 Republican contests in the books – including Puerto Rico’s primary on Sunday – the number of delegates allocated to the four remaining candidates have now passed the one-third mark.

As such, there is an ever-increasing eye as to how many delegates have landed in Donald Trump’s column as he attempts to secure 1,237 by Cleveland.

But what is Trump’s actual count of pledged delegates? How many more delegates does he need to reach 1,237? And what is his current lead over Ted Cruz?

Don’t look to the media for clarity or consensus.

Smart Politics reviewed the Republican delegate tracker counts at five prominent news outlets (AP, CBS, CNN, NBC, FiveThirtyEight) and found that none are identical, with disagreements in 11 state contests and no outlets agreeing on the delegate count for any of the top three candidates.

For starters, many media outlets have identical delegate counts because they are simply using data provided by the same source: the Associated Press. As such the numbers for the following outlets are in unison because they are not conducting independent delegate counts: ABC News, Bloomberg, FOX News, Huffington Post, New York Times, National Public Radio, POLITICO, Time, USA Today, Wall Street Journal, and the Washington Post.

However, the Associated Press, CBS, CNN, NBC, and FiveThirtyEight do not provide an external source for their delegate tallies and thus presumably are doing independent calculations.

None of these five outlets have identical counts and, more interestingly, none have the same count for any of the top three candidates – Donald Trump, Ted Cruz, and Marco Rubio. 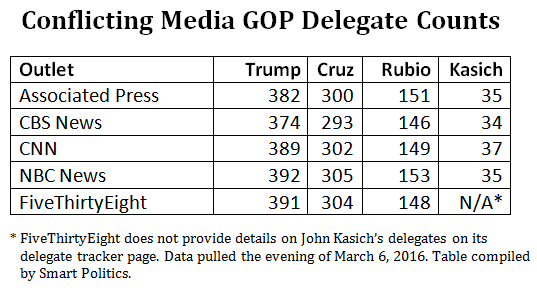 NBC News allocates the largest number of delegates to Trump with 392 which puts him 845 delegates shy of a majority.

Trump’s lead over Cruz thus ranges from a high of 87 delegates at CNN, FiveThirtyEight, and NBC (though with different ranges for each) to 82 at the Associated Press and 81 at CBS.

Although he only has a few dozen delegates, only two outlets agree on the Ohio governor’s delegate count: the AP and NBC with 35. CNN awards Kasich 37 delegates with CBS at 34. [FiveThirtyEight does not profile Kasich’s delegates on its delegate count/target site].

Variation in the States

So where are all these different numbers coming from? In which states do media outlets diverge in their delegate counts? 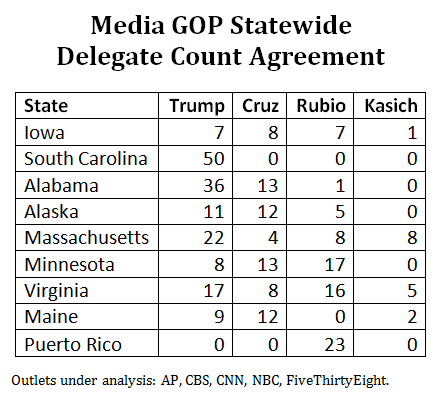 However, there is at least one discrepancy among the five outlets under analysis across the other 11 states with CBS having the most outliers:

With four states voting in Republican primaries and caucuses on Tuesday (Hawaii, Idaho, Michigan, and Mississippi), expect the delegate counts by the media outlets to differentiate themselves from one other even more by Wednesday morning.