Rubio joins George H.W. Bush in 1980 and Pat Robertson in 1988 as the only Republicans since the mid-1930s with wins under their belt to lose a home state primary 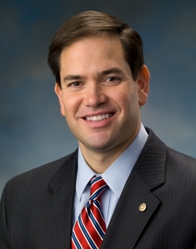 Marco Rubio’s presidential campaign came to an end on Tuesday when businessman Donald Trump handily disposed of the U.S. Senator in his home state of Florida.

The double-digit defeat was resounding as expected, even as negative ads against Trump peppered the airwaves all week and Rubio hunkered down in the state in a last ditch attempt to win Florida and keep his campaign alive.

Rubio is far from the first presidential candidate to lose his home state, but few major, bona fide candidates have done so in the primary era.

A Smart Politics analysis finds that Marco Rubio’s loss in Florida makes him just the third Republican since the Great Depression to lose a home state primary in a cycle in which the candidate carried at least one state.

For this analysis, Smart Politics tracked Republican candidates who lost their home state primary (before exiting the race) and who were victorious in at least one state with a presidential preference vote.

Rubio lost Florida by nearly 20 points after winning one state this cycle – the Minnesota caucuses on Super Tuesday – as well as the Puerto Rico primary and the Washington, D.C. caucuses.

Since the beginning of the primary era in 1912, just a half-dozen GOPers with at least one victory under their belt fell short in a primary in their home state, with Rubio just the third since the mid-1930s.

In 1912, the two Republican frontrunners lost their home states to each other.

Meanwhile, in New York, Roosevelt was defeated decisively by Taft. Taft won the the former president’s home state by 32.8 points with 66.4 percent – nearly doubling up on Roosevelt’s 33.6 percent.

The next Republican candidate to lose his home state primary after securing a victory was California U.S. Senator Hiram Johnson in 1924.

That was the only state Johnson would win, however, and Coolidge defeated the Golden State senator that May in California by 8.6 points.

However, Hoover defeated Senator France in his home state of Maryland by 22.7 points. Hoover carried the state with 60.0 percent with just 37.3 percent for France.

No Republican presidential candidate who won at least one state lost his home state primary for nearly a half-century.

Ronald Reagan upset Bush in his home state of Texas in early May, however, winning the Lone Star State by 3.6 points with 51.0 percent to Bush’s 47.4 percent.

Robertson won only 13.7 percent in the Old Dominion State – 40 points behind Bush and also trailing Bob Dole for a distant third place finish.

In addition to the six candidacies listed above there is this addendum.

In 1996, Pat Buchanan won four primaries and caucuses (Alaska, Louisiana, Missouri, New Hampshire) and in March, the conservative columnist also lost the Virginia caucuses. However, there was no preference vote in the state’s delegate selection process that cycle.

In 2012, Ron Paul never won the popular vote in any state contest, though he claimed a majority of delegates by the time of the convention in four states (Iowa, Louisiana, Maine, and Minnesota). Paul lost his home state of Texas that cycle by 57.1 points to Mitt Romney, receiving only 12.0 percent of the vote.