Iowa U.S. Representatives have successfully defended each of their last 188 renomination bids over the last 66 years 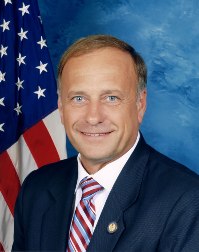 King has not faced a primary challenger since entering Congress in 2003, after a competitive four-way race to secure the GOP nod in 2002 against fellow State Senator John Redwine, State Representative Brent Siegrist, and businessman Jeff Ballanger. [In that race, no candidate reached the mandatory 35 percent threshold in the primary and King subsequently defeated Siegrist on the third ballot at the district nominating convention].

No stranger to controversy with liberals, King has also endured scorn from some Iowa GOPers this cycle, particularly after backing anti-ethanol presidential candidate Ted Cruz before the Iowa caucuses.

As a result, Iowans – and King – are taking this primary challenge seriously, even though no incumbent from the Hawkeye State has lost a renomination bid during King’s lifetime.

A Smart Politics analysis of Iowa election data finds that every Iowa U.S. Representative running for reelection since 1950 has won their party’s primary – a string of 188 consecutive victories through 2014.

The last Iowan to lose a primary for a U.S. House seat was seven-term Republican John Gwynne in 1948 – one year before King was born.

Since Gwynne’s loss, Iowa U.S. Representatives have rattled off 188 primary wins in a row with 16 other primaries held for open seats.

Prior to the 1950s, it was more common – though still unusual – for members of the nation’s lower legislative chamber from Iowa to lose their party’s nomination.

From the onset of the primary era in 1908 through 1948, approximately one in 20 incumbents running for reelection lost their renomination bids – nine out of 191 (4.7 percent).

Iowa passed its primary law on April 4, 1907 after a decade of lawmakers attempting to bring the power of the nominating process into the hands of the people. The first U.S. House primaries  in Iowa were conducted on June 2, 1908.

In that 1908 cycle, five-term Republican James Conner was the first victim of the new primary law in a congressional race.

Over the next four decades, eight other Iowa U.S. Representatives lost their renomination bids including Gwynne in 1948:

Of the eight instances during the primary era in which Republican incumbents lost their party’s nomination, the GOP still held the seat all eight times in the general election.

The only instance of a seat flipping after an incumbent lost a renomination bid since 1908 came after the aforementioned Democrat Sanford Kirkpatrick was defeated in the 6th CD primary by W.H. Hamilton in 1914. Hamilton lost the seat for the Democrats to C. William Ramseyer that November by 6.0 points.

While the odds of a King upset in June are not favorable to Bertrand, the 4th CD is the best chance to see an Iowa U.S. Representative lose a renomination bid this cycle.

Republican Rodney Blum in the 1st CD does not face a primary challenger nor does Democrat Dave Loebsack in the 2nd CD.

Freshman GOPer David Young in the 3rd CD will face former State House nominee and retired Des Moines school teacher Joe Grandanette. Grandanette ran against Young and five other Republicans in 2014 for Tom Latham’s open seat but finished a distant sixth place in both the primary and subsequent nominating convention.