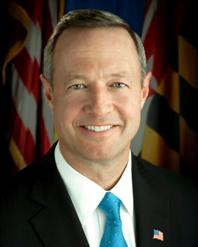 Martin O’Malley withdrew from the race for the Democratic nomination after the Iowa caucuses on February 1st, but he has still garnered measurable support in primaries from time to time over the last three months including in Kentucky on Tuesday.

That support has been concentrated in one region of the country – the South.

It may very well be the case that the tens of thousands of voters who have backed O’Malley in the South may be doing so as a form of protest – particularly among conservative Democrats who are neither smitten with Hillary Clinton (as a former member of the Barack Obama administration) or the more liberal ‘Democratic socialist’ Bernie Sanders.

To date, the former Maryland governor has won north of one percent of the primary vote in six southern states.

That tally includes Tuesday’s primary in Kentucky where O’Malley won 1.3 percent, or 5,700+ votes – a small margin, but still greater than the difference between Clinton and Sanders.

Clinton outdueled Sanders by just shy of 2,000 votes. Another 5.3 percent of Kentucky Democrats were ‘uncommitted.’

O’Malley’s best showings of the cycle came in Oklahoma on Super Tuesday (March 1st) and in Florida on March 15th where he notched 2.3 percent in each state.

Last week, O’Malley turned in his third best performance of the primary season in West Virginia with 1.6 percent.

The former governor also won 1.3 percent in Clinton’s home state of Arkansas on Super Tuesday and 1.1 percent on March 15th in North Carolina.

It should be noted the anti-Obama 2012 primary vote was exceedingly high in some of these Southern states: 42.9 percent in Oklahoma, 42.2 percent in Kentucky, 41.6 percent in Arkansas, 40.7 percent in West Virginia, and 20.8 percent in North Carolina.

O’Malley’s name was not on the ballot in his home state of Maryland on April 26th.