Kasich, Cruz, and Carson received the most votes as former White House hopefuls; 10 GOPers won more votes as ex-candidates than when they were still in the race 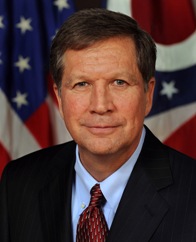 The GOP had a modern era high water mark of 17 major candidates running for office with 14 appearing on at least one state ballot this cycle.

One by one these candidates fell to Donald Trump, but hundreds of thousands of voters across the country turned out to support them even though their campaigns had ended days, weeks, or sometimes even months before.

Smart Politics tallied the results from primaries and caucuses throughout the campaign and found that more than 1.6 million Republican voters cast their presidential preference vote for candidates who had already exited the race, or 5.4 percent, led by John Kasich, Ted Cruz, and Ben Carson.

Jeb Bush, whose campaign ended early after the South Carolina primary, appeared on 34 state ballots as an ex-candidate – most in the field.

The Republican winning the most votes as a former candidate, however, was Governor Kasich at 451,673 – approximately 31K more than Senator Cruz who tallied 420,577.

Kasich and Cruz both exited the race after the Indiana primary in early May, and Cruz received more support than the governor in seven of the final nine primaries – Nebraska, West Virginia, Oregon, Washington, Montana, New Mexico, and South Dakota.

But Kasich netted more than 70K votes over Cruz in California (where he recorded 205K votes) and New Jersey (59K) to end up the leading vote-getter among ex-candidates this cycle.

But not all candidates peppering the top of the list were late-exiters.

Ben Carson, who suspended his campaign after Super Tuesday on March 4th, came in third with 263,092 votes with Jeb Bush a distant fourth at 191,498 votes.

Both candidates received many more votes than Marco Rubio’s 119,163, who was the third to last Republican to suspend their campaign on March 15th.

Carson won more votes than Rubio in six of the eight states in which the names of both candidates still appeared on the ballot: in Delaware, Maryland, Pennsylvania, Indiana, Nebraska, and West Virginia. 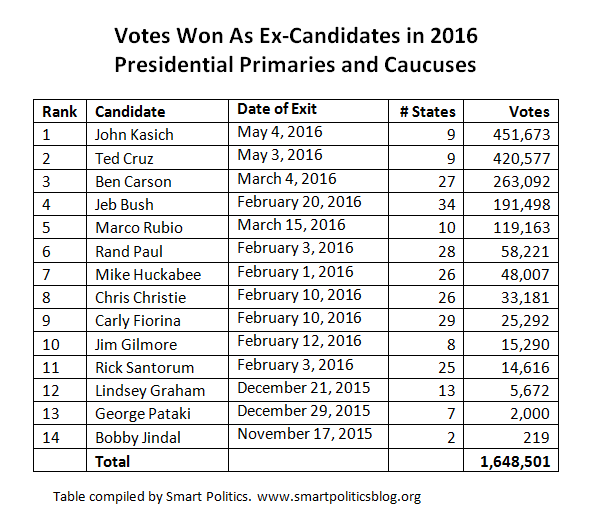 Gilmore, it should be noted, famously won only 12 votes in Iowa and 134 in New Hampshire while still running for the office.

The former Virginia governor therefore claimed 104 times more votes across the eight states in which he appeared on the ballot after exiting the race – 12,770 of which came in California.

In total 10 Republican White House hopefuls received more votes as ex-candidates than they did while they were still on the campaign trail: Bush, Paul, Huckabee, Christie, Fiorina, Gilmore, Santorum, Graham, Pataki, and Jindal. 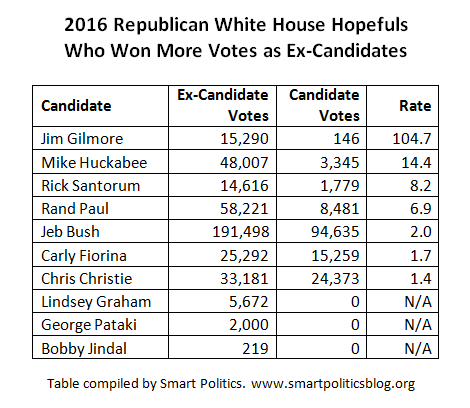 Overall more than 1.64 million votes were cast for ex-candidates during the primary season, or 5.4 percent of all votes in contests with a presidential preference vote.

A total of 10 states saw votes for ex-candidates eclipse the 10 percent mark – Arizona and each of the last nine contests on the calendar.

Early voting contributed in part to the elevated support for ex-candidates in Arizona, Nebraska, and West Virginia when candidates exited the race after in-person early voting had begun.