One-quarter of all Bay State U.S. Senators were preceded by a family member in Congress; Joe Kennedy III would become the 14th 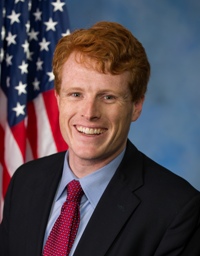 This is the fifth in a series of reports on political royalty in Congress. Past reports have focused on Florida, Michigan, Illinois, and Wyoming.

Elizabeth Warren’s recent full-throated endorsement of Hillary Clinton – and reports that she is being vetted to be the former Secretary of State’s running mate – has heightened the buzz that the Massachusetts U.S. Senator’s seat could be vacant next year. (Leading to problems for the Democrats that were recently discussed here).

If Warren is picked and the Democratic ticket wins in November, her successor will be a Republican appointed by Governor Charlie Baker. In Massachusetts, state law requires that a special election be held for the seat between 145 and 160 days after the vacancy occurs.

One Bay State politician who has already contemplated running in such a special election is two-term Democratic U.S. Representative Joe Kennedy III.

Although Kennedy has the third shortest tenure of the state’s nine-member Democratic U.S. House delegation (ahead of only Katherine Clark and freshman Seth Moulton), his surname would make him a formidable candidate in the race.

And, were he victorious in such a contest, Rep. Kennedy would add his name to an already substantial list of Massachusetts’ U.S. Senators who came from political royalty.

A Smart Politics review of the Biographical Directory of the United States Congress finds that 13 of Massachusetts’ 53 U.S. Senators since statehood had family members who had previously served in Congress, or 24.5 percent.

John Quincy Adams famously served in the nation’s lower legislative chamber at the end of his political career (1831-1848).

A half-dozen additional Massachusetts U.S. Senators preceded family members who later served in one of the nation’s two legislative chambers: