Midwestern states account for 40 percent of the cumulative female lieutenant gubernatorial service in U.S. history along with the three longest current streaks (Minnesota, Iowa, and Wisconsin) 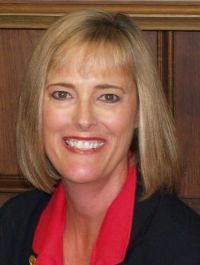 Smart Politics recently reported how women will have few opportunities to increase the number of governorships they hold after the 2016 elections.

The six governorships currently held by women is down from a peak level of nine back in 2004.

And that number is assured to increase in 2016.

None of the female lieutenant governors currently in office are up for reelection this cycle and several women have already been selected as major party nominees across the nine states holding contests this cycle where the position is a constitutional office.

Both major party nominees in Indiana are women which will ensure there will be at least 13 female lieutenant governors come January 2017.

In North Dakota, Democratic State Senator Joan Heckaman was chosen to be Marvyn Nelson’s running mate in a state where Democrats are in the midst of their third longest gubernatorial drought in the nation – losing the last six contests since 1992.

In North Carolina, the position of lieutenant governor is a stand-alone election with former Democratic state legislator and 2012 nominee Linda Coleman easily winning a four-way primary in March. Coleman is challenging Lieutenant Governor Dan Forest with polling a dead heat between the two candidates.

Women also have a chance to claim seats in two other states pending primary elections.

In Vermont, State Representative Kesha Ram is one of three Democrats squaring off in next week’s primary along with State Senator David Zuckerman and State House Speaker Shap Smith.

The winner of that primary will be favored to win the seat in the general election.

In total, women have been elected over 110 times to the office of lieutenant governor and served a collective 414 years in the office.

The partisan division has been fairly equal: Democrats have accounted for 211 of these years with Republicans tallying 195 years and third parties at eight years.

The Midwest has by far led the way in electing (or appointing) women to this position with the 12-state region accounting for 164 of these years of service collectively, or 39.6 percent.

The Northeastern region accounts for 94 years of service (22.8 percent) with the South and West at 78 years each (18.8 percent).

Each of the 12 states in the Midwest region can list at least one woman who served as lieutenant governor as well as all nine states in the Northeast that have this constitutional office. Women have held the position in eight southern states and six in the West.

Another Midwestern state has the third longest consecutive streak in the nation with women holding the lieutenant governorship in Wisconsin for the last 15+ years since May 2001. 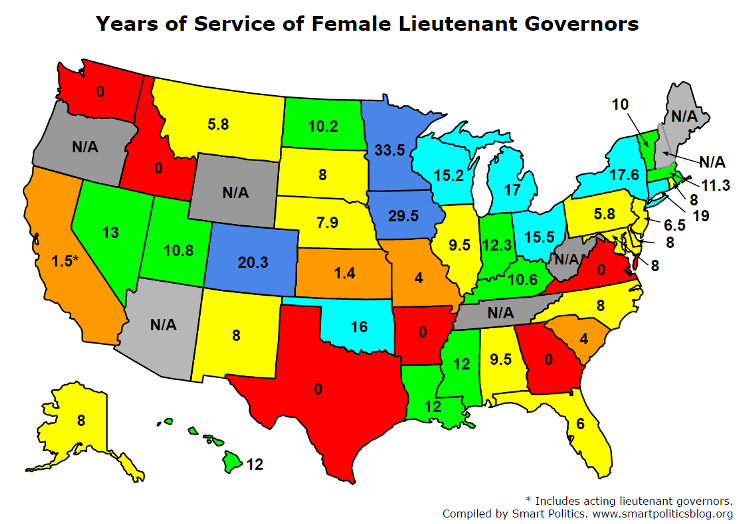 Of the 86 women to serve as lieutenant governor across three-dozen states, 55 have served in the 21st Century, or 64 percent.