Retiring U.S. Senator Harry Reid is the only Democrat to currently hold one of Nevada’s eight partisan statewide offices 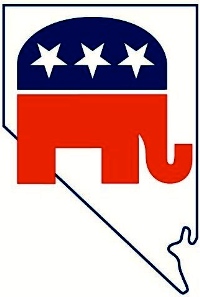 Democrats have been on the attack in 2016 – hoping to pry away four U.S. Senate seats as well as keep the presidency (or five seats without it) to reclaim control of the nation’s upper legislative chamber.

But although Republican pick-up opportunities have been slim this cycle (owing to the Democratic Party’s poor performance six years ago in 2010 and thus having to defend very few vulnerable seats), the GOP has a good chance to land a seat they haven’t held in 30 years – Nevada’s Class III seat held by retiring Harry Reid.

Nevada Republicans are coming off a heady 2014 cycle, when the GOP took back control of four constitutional offices – secretary of state, controller, treasurer, and attorney general, as well as picking up a U.S. House seat and winning control of both state legislative chambers.

But if Heck is victorious this November, Nevada Republicans will be able to celebrate a feat the party has not achieved in nearly 150 years.

A Smart Politics review of Nevada electoral history finds that if Joe Heck wins the Silver State’s 2016 U.S. Senate race, Republicans will hold all partisan statewide offices for the first time since 1870.

Over the course of Nevada’s 152-year history, there have been 14 statewide offices which at one point were filled at the ballot box in partisan elections.

There have been three periods in Nevada history totaling a shade over 18.5 years in which one party controlled all partisan statewide offices as well as both U.S. Senate seats and that of U.S. Representative (which was a statewide, at-large position from 1864 through 1982).

The most recent instance was a five-month period in 1962 when Democrats held all 11 partisan statewide offices still in existence at that time (the current six constitutional offices, plus both U.S. Senate seats, the at-large U.S. House seat, superintendent of state printing, and inspector of mines).

However, Bell died on July 4, 1962 and Assemblywoman Maude Frazier was appointed to the position completing the Democratic hold on all such offices. [Frazier’s appointment marked the highest political office held by a woman in Nevada at that time].

Democrats held all statewide offices for a shade under a half a year until early January 1963, when Paul Laxalt took over the position of lieutenant governor for the GOP once again after defeating former Congressman Berkeley Bunker in the 1962 general election – the only statewide loss by Democrats that cycle.

The Democratic Party had a much longer stranglehold on the top elected positions in the state a few decades earlier during the Great Depression.

For a 12-year stretch from January 1935 through December 1946, Democrats held each of the 11 partisan statewide positions mentioned above plus that of Supreme Court clerk and surveyor general.

The only other period in state history in which one political party had a lock on all partisan statewide offices began when Nevada achieved statehood in October 1864.