With no candidate polling outside of the low 30s, Utah’s winner could break a 104-year old record for the lowest percentage of the vote to carry a state 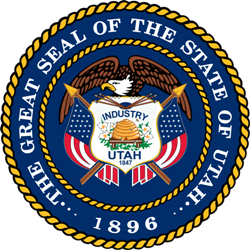 Utah continues to get an unusual amount of attention in the news and by pollsters this cycle as the reliably Republican state sees its presidential race in a tight three-way contest between Donald Trump, Hillary Clinton, and independent Evan McMullin.

The latest poll of likely voters released by Emerson College on Wednesday found McMullin leading with 31 percent followed by Trump at 27 percent, Clinton at 24 percent, and Libertarian nominee Gary Johnson fading at 5 percent.

That survey came on the heels of a Rasmussen poll released on Monday showing a statistical dead heat with Trump at 30 percent, McMullin at 29 percent, and Clinton at 28 percent with Johnson at 5 percent.

The Emerson survey is the third poll released over the last week in which no candidate has had the support of more than 31 percent of Utahans, which puts the Beehive State in the position to set a remarkable record in the annals of presidential elections. [Update: A fourth poll, released Thursday by UtahPolicy, found Trump with 30 percent, McMullin with 29 percent, Clinton with 25 percent, and Johnson with 4 percent].

Smart Politics examined the 2,000 popular vote statewide presidential elections held since 1828 and found that Utah could break the record for the lowest support ever recorded by a winning presidential candidate set by Woodrow Wilson in his 1912 Idaho victory with 32.1 percent.

Thirty-six of these statewide elections across the 47 election cycles since 1828 were won by a candidate with less than 40 percent, or 1.8 percent of such contests.

To create a scenario for a candidate to win a state with such a weak plurality, all of these races, by definition, took place during election cycles with a prominent third party candidate (or two).

In 1912, the Republican Party was fractured after former President Teddy Roosevelt failed to win the GOP nomination and ran instead as a Progressive. As a result of this fracture (plus a strong performance by Socialist Eugene Debs who won north of 10 percent in seven states), the winner of 20 states in the 1912 election failed to win 40 percent of the vote.

Idaho was one of those 20 states, where Democrat Woodrow Wilson was victorious with an all-time record low of just 32.1 percent – 1.1 points ahead of President William Taft (31.0 percent) with Roosevelt at 24.1 percent and Debs at 11.3 percent.

Close behind Idaho is California, where Abraham Lincoln won 32.3 percent during the turbulent Election of 1860. Lincoln defeated Democrat Stephen Douglas by 0.6 points (31.7 percent) with Southern Democrat John Breckenridge just behind at 28.4 percent and Constitutional Union nominee John Bell at 7.6 percent.

All of the remaining states populating the Top 10 list for the lowest support recorded by a presidential candidate carrying a state came during the Elections of 1860 and 1912:

Looking at other cycles, the Election of 1848 yielded one state with a winner tallying less than 40 percent. Wisconsin, in its first presidential election, backed Democrat Lewis Cass with 38.3 percent ahead of Whig Zachary Taylor (35.1 percent) and Free Soiler and former President Martin Van Buren  (26.6 percent).

The Election of 1860 saw three state winners fall short of 40 percent – California, Missouri, and Oregon, all mentioned above.

In 1968, four southern states produced winners with less than 40 percent, due to George Wallace’s strong showing in the region. Nixon won Tennessee with 37.9 percent, South Carolina with 38.1 percent, and North Carolina with 39.5 percent while Wallace won Arkansas with 38.7 percent. 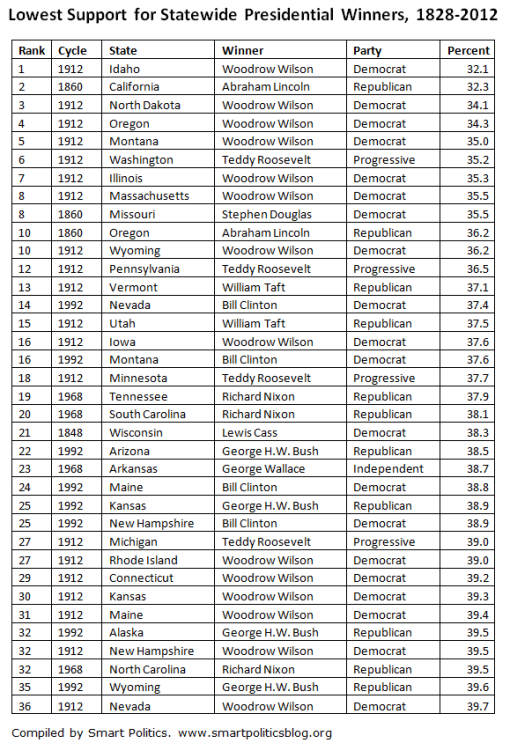 For Utah to break Idaho’s 1912 record in 2016, Gary Johnson will likely need to regain some of the support he has shed over the last month (Johnson had been polling in double-digits in multiple Utah polls).

With approximately 10 percent of likely voters in Utah still undecided, the race may also require a razor thin margin between McMullin, Trump, and Clinton with these remaining undecided voters breaking fairly evenly among the candidates.

A recent Smart Politics report documented how a win by McMullin would set the record for the lowest percentage of the national vote ever recorded by a presidential candidate who won the popular vote of at least one state.