Republicans would break a party record if eight U.S. Senate nominees are elected from states voting Democratic for president

Smart Politics has written extensively over the years on split-ticket voting and the 2016 cycle is poised to see some firsts as states vote in races for president and U.S. Senate.

For example, Arkansas is one of two states – along with Hawaii – never to vote for a Republican for both offices in the same cycle.

That will change in November as Donald Trump will easily carry the second of Hillary Clinton’s three home states and incumbent John Boozman should cruise to a double-digit victory over Democratic challenger Connor Eldridge down the ballot.

Meanwhile, the chance for voters to split their ticket by electing a Democratic U.S. Senator whilst casting their Electoral College votes for Trump only exists in a handful of states.

Indiana (Democrat Evan Bayh) and Missouri (Jason Kander) are perhaps the two states most likely to do so with Nevada (Catherine Cortez Masto) and North Carolina (Deborah Ross) also possibilities given the fact that each state’s U.S. Senate and presidential races are toss-ups.

By comparison, 22 states split their vote for a Republican presidential nominee and a Democratic U.S. Senate candidate over the last four cycles since 2000:

On the other side of the coin, Republican U.S. Senate candidates have been victorious in states carried by Democratic presidential nominees just eight times during this four-cycle stretch:

However, that trend may drastically change on November 8th.

Smart Politics reviewed the 25 presidential election cycles conducted since the start of direct election of U.S. Senators a century ago, and finds that Republicans have a chance this cycle to win the most U.S. Senate seats in party history in states won by a Democratic presidential nominee.

Senator Ron Johnson in Wisconsin also has an outside shot of keeping his seat in a state that is likely to vote for Clinton.

Additionally, Republican U.S. Senators in Alaska (Lisa Murkowski) and Georgia (Johnny Isakson) are heavily favored to keep their seats, even if Clinton is able to surge and overcome the single-digit deficit she currently faces to Trump in those states.

If eight of these 11 states split their tickets in this fashion it will set a Republican Party record, although four of these states have never split their vote along these partisan lines before: Alaska, Florida, North Carolina, and Wisconsin.

At the moment, 10 of these 11 Republican nominees currently have an advantage from one point to double-digits in their respective Real Clear Politics polling average (all but Johnson in Wisconsin).

Meanwhile, RealClearPolitics also finds Clinton currently leading Trump in seven of these states (all but Iowa, Ohio, Alaska, and Georgia).

The high-water mark for the GOP in winning seats to the nation’s upper legislative chamber in states where Democrats won the presidential race is seven – a feat achieved in both 1992 and 1996.

The reverse has been much more common with Democratic U.S. Senators getting elected in states won by Republican presidential nominees 157 times since 1916. 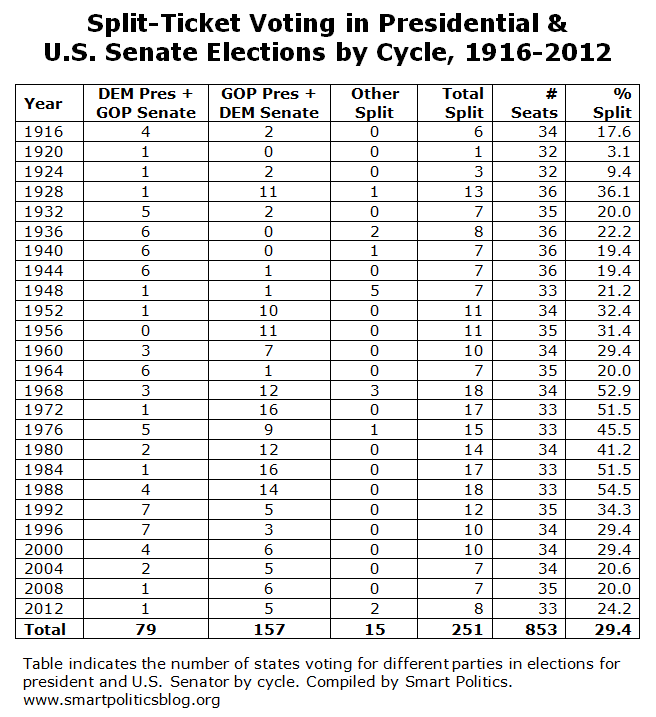