History suggests the nation is overdue for a record-setting U.S. Senate nail-biter and there are plenty of states that could serve up extremely close contests on November 8th

While the battle for control of the U.S. Senate has understandably taken a back seat to the strange, winding road of this year’s presidential contest, the 2016 cycle is nonetheless poised to see many competitive contests down the ballot in races for the nation’s upper legislative chamber.

Elections in Florida, Indiana, Missouri, Nevada, New Hampshire, North Carolina, and Pennsylvania in particular might not be called until late in the evening – or not on election night at all – with a chance that one of these races might end up being the closest U.S. Senate contest in their respective state’s history.

So how competitive would each have to be to set a new state record?

For this study, Smart Politics reviewed the more than 1,700 direct elections that have been conducted for the U.S. Senate to determine the most closely decided contests in each of the 50 states.

Most states have hosted at least one extremely competitive U.S. Senate election over the last century, with 37 states seeing at least one of its races decided by less than one percentage point.

The most narrowly decided races in seven of these states ended up with victory margins tallying less than one-tenth of a percentage point.

Of the remaining 13 states, the closest U.S. Senate race in five states resulted in victory margins of more than two points with Arkansas’ the largest in the nation at 5.4 points (Republican Tim Hutchinson over Democrat Winston Bryant in 1996).

The last two state records to fall for the most competitive U.S. Senate elections came in the 2008 cycle with voters in Alaska and the aforementioned race in Minnesota between Franken and Coleman treated to historically close races.

In Minnesota, Franken’s 0.01-point win over Coleman ended an 84-year record dating back to the Election of 1924 when Republican Congressman Thomas Schall unseated Farmer-Laborite U.S. Senator Magnus Johnson by a 0.95-point margin.

Another state record could very well fall in 2016 as the nation has never gone six years – let alone eight – without at least one state breaking its mark for the closest ever U.S. Senate contest.

Other state records set during the 21st Century came in Nebraska in 2000 (Democrat Ben Nelson by 2.18 points over Don Stenberg), Washington in 2000 (the previously discussed race between Cantwell and Gorton), South Dakota in 2002 (Democratic U.S. Senator Tim Johnson by 0.15 points over Republican U.S. Representative John Thune) and Tennessee in 2006 (Republican Bob Corker by 2.72 points over Democratic Congressman Harold Ford, Jr.). 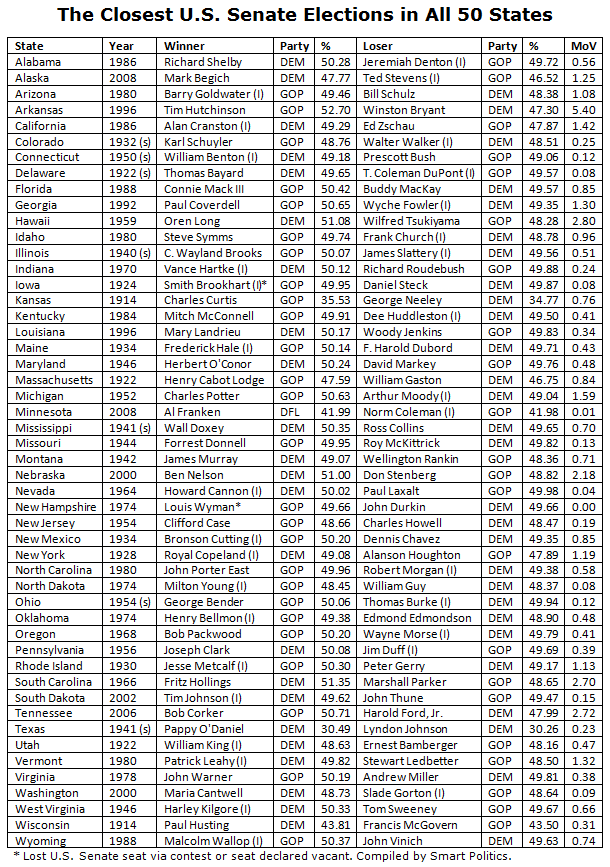 It should come as no surprise that North Carolina’s 2016 race between Senator Richard Burr and Democratic challenger Deborah Ross is poised to be one of the most closely decided this cycle.

The Tar Heel State has hosted the most competitive races for the U.S. Senate over the last quarter-century, with an average margin of victory of just 6.1 points across its nine elections to the chamber conducted since 1990.

Two other must-watch states next Tuesday – Missouri and Pennsylvania – are tied for the fourth most competitive during this quarter-century span, with U.S. Senate elections decided by an average of 9.9 points.