Since the passage of the 17th Amendment all but seven states have been represented by a single party in the U.S. House and Senate for at least one Congress 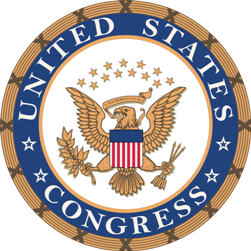 When the 115th Congress convenes on Tuesday, there are few indicators that might assuage those who believe that extreme partisanship on both sides of the aisle has rendered the nation’s two legislative chambers increasingly ineffectual in recent years.

A frequent refrain heard in D.C. is that members on opposite sides of the aisle no longer talk to each other, and thus members are less personally invested in striking deals with the other side.

Compounding the problem is the recent trend of fewer and fewer states being represented by more than one party in Congress – thus providing less opportunities for members to build bipartisan bridges even within a state delegation.

A Smart Politics study finds that 15 states send single-party congressional delegations to the U.S. House and Senate for the 115th Congress – more than double the number from eight years ago and the largest number of such states since the 1950s.

[Note: This study chose the 64th Congress as the departure point as it convened after the first general election in which states began electing U.S. Senators via direct elections (1914). Some states still had U.S. Senators in office who had been elected via state legislatures until the 66th Congress convened in 1919.]

Following the 2016 election, 15 states are now represented by only a single party on Capitol Hill.

That marks an increase of two states from the 114th Congress when 13 states were represented by one party in both chambers – each of those states listed above minus Nebraska and New Hampshire. [In 2016, the Nebraska GOP ousted Democrat Brad Ashford from the state’s 2nd CD while New Hampshire Democrats unseated Republican incumbents in the U.S. Senate (Kelly Ayotte) and the state’s 1st CD (Frank Guinta)]. 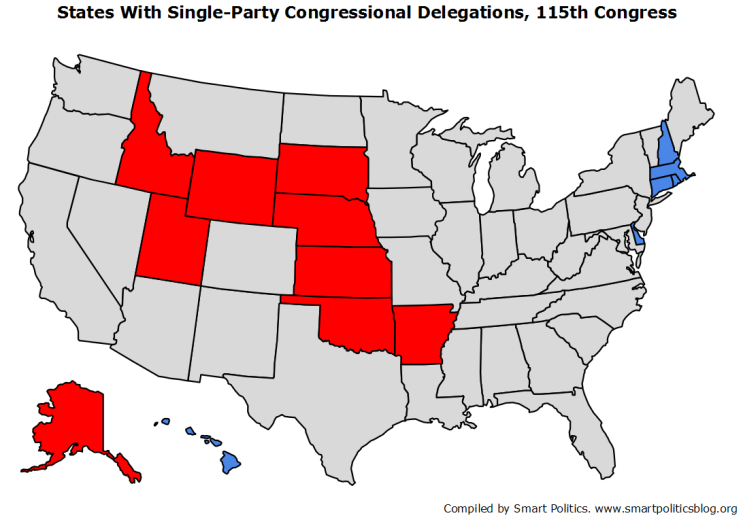 By contrast, after the 2008 election there were just six states with single-party representation in Congress: Hawaii, Massachusetts (until Scott Brown won a 2010 U.S. Senate special election), New Mexico, North Dakota, and Rhode Island for the Democrats and Wyoming for the Republicans. That marked the lowest number since 1993 when there were just five single-party states: Hawaii, North Dakota, and West Virginia for the Democrats and Alaska and Wyoming for the GOP.

The last time Congress had 15 states represented by one political party in each chamber was at the convening of the 85th Congress 60 years ago in 1957.

The nine Republican-controlled states in the 115th Congress is the largest number for the GOP since the 84th Congress (1955-1957) when seats in nine states were all in the Republican column: Iowa, Kansas, Maine, Nebraska, New Hampshire, North Dakota, South Dakota, Utah, and Vermont.

While this current level of single-party representation in the states is an outlier over the last half-century, it is hardly unprecedented. 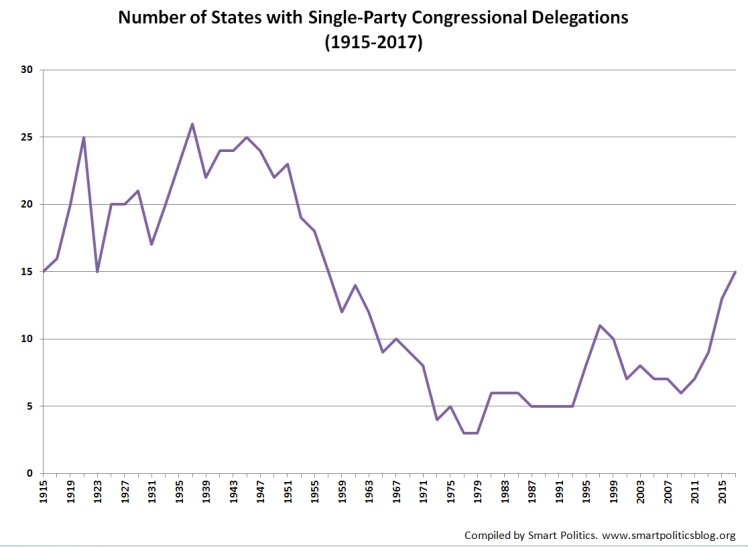 Overall, states have sent single-party delegations to Congress 689 times since the 64th Congress (1915-1917). A total of 418 of these were all-Democratic and 271 were all-Republican.

Nearly every state has sent at least one single-party congressional delegation to D.C. during this 100-plus year span with the only exceptions being California, Illinois, Missouri, New Jersey, New York, Ohio, and Tennessee.

North Dakota is the only state to have logged at least 10+ Congresses with its seats under control of Democrats (12 times) and Republicans (22 times).

Of course, Democrats dominated the South for many decades during this span with southern states holding six of the top seven slots for the most cycles with all-Democratic delegations since the 64th Congress: Mississippi (28), Georgia (27), Louisiana (27), and Arkansas (26) claim the top four spots with Alabama (25), South Carolina (25), and Rhode Island (25) tied for #5.

However, many states with moderate to large populations in the Midwest and Northeast saw the Republican Party hold every congressional seat at some point during the last century:

The last time the GOP held each of the U.S. House and Senate seats with combined delegations of at least 10 seats between the two legislative bodies was in Iowa during the 84th Congress (1955-1957).

Democrats have achieved this feat in Massachusetts (11 seats) since the convening of the 113th Congress in 2013.