For the first time in Minnesota history, every member elected to the state delegation was 50+ years old 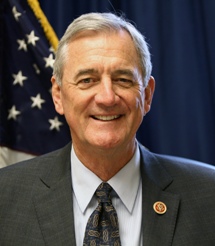 With septuagenarian U.S. Representatives Collin Peterson and Rick Nolan (pictured) able to fight off much younger Republican challengers in 2016, the DFL duo not only continues to climb the list of the all-time oldest Minnesota U.S. House members but also ensured their delegation to the 115th Congress would be the oldest in state history.

Nolan, who turned 73 last month, and Peterson, 72, are currently the fifth and seventh oldest Minnesota U.S. Representatives out of the more than 130 to be sworn into office since statehood.

Through Tuesday, Nolan is 73 years, 1 month, 1 day old and will pass turn of the 20th Century Republican Congressman Loren Fletcher (73 years, 10 months, 21 days) for fourth place on November 7th of this year.

Holding the all-time record is Farmer-Laborite Richard Buckler who was 77 years, 2 months, 7 days when he retired from the chamber at the close of the 77th Congress in January 1943.

Buckler was nearly one year older than DFLer Jim Oberstar (76 years, 3 months, 24 days) when he completed his 18th term in January 2011 after losing his reelection bid.

But Nolan and Peterson are simply the tip of the state delegation’s graying spear.

Smart Politics tallied the average age of the 81 U.S. House delegations from Minnesota since statehood and found that the eight men and women elected to the 115th Congress in 2016 is the oldest since statehood by a full year.

The 2016 cycle also marks the first time in state history that every member elected to the U.S. House delegation was at least 50 years old.

Since statehood, the average age of Minnesota’s newly elected House delegation has been 48.1 years old. Longer life spans and low turnover in the state’s U.S. House seats in recent decades have contributed to an increase in the average delegation age.

However, despite these older delegations, only one Minnesota U.S. Representative has died in office during the last 68 years – 16-term Republican August Andresen in 1958.

The youngest delegation in Minnesota history was its first when at-large Democrats James Cavanaugh (34) and William Phelps (31) entered Congress in 1858, for an average of 32.5 years.

Rep. Lewis, who narrowly held John Kline’s 2nd CD seat for the GOP in November at the age of 61, became one of just eight Minnesotans to win their first term in the chamber at 60+ years old and the first to do so since DFLer Roy Wier in 1948 (60).

As for Nolan and Peterson, septuagenarian U.S. Representatives from Minnesota have not always exited the House on their own terms.

Of the remaining six:

Only one octogenerian from Minnesota has ever served on Capitol Hill in either chamber: Republican U.S. Senator Knute Nelson reached the age of 80 years, 2 months, 27 days when he died in office during the 68th Congress in 1923.