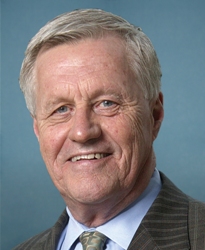 In recent election cycles, political observers have frequently questioned Collin Peterson’s commitment to running another campaign based on perceived lackluster fundraising numbers, his outlier Blue Dog ideology within his party, and the GOP-lean of his district.

And yet, in every cycle, Minnesota’s 7th Congressional District DFLer runs and wins again.

To the surprise of no one who reads this site, Peterson stated last week to Roll Call that he will once again stand for reelection in 2018 – two years after he survived a 5-point victory in a district Donald Trump carried by 31 points.

Peterson’s tenure is becoming increasingly noteworthy – not only as one of the few Blue Dog Democrats remaining in the U.S. House but also for his political longevity in the Gopher State.

If Peterson is reelected in 2018, he will become just the fourth Minnesotan to win 15 or more terms to the nation’s lower legislative chamber and the third to win them consecutively.

[Note: Andresen’s tenure was interrupted after his first four terms following his loss during the Election of 1932. The 1930 U.S. Census saw Minnesota lose one of its 10 seats due to reapportionment and the state could not agree on new district lines. As a result, all nine Representatives were elected at-large that cycle. Andresen placed 10th in the U.S. House contest with 30+ candidates on the ballot – just 1,023 votes behind the aforementioned Knutson in ninth.]

Following the 115th Congress, Peterson will trail only Oberstar, Knutson, Andresen, and Republican Knute Nelson on the all-time tenure list for congressional service in state history.

Peterson currently sits in seventh place with 26 years, 3 months, and 28 days tallied through the end of April. 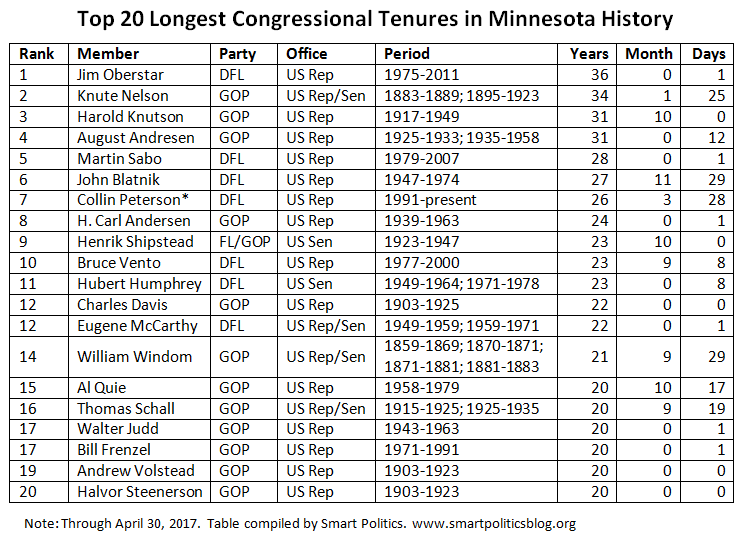