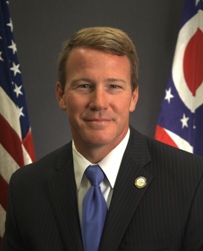 The large field for Ohio’s 2018 gubernatorial race got a little more crowded earlier this week when another statewide official, Secretary of State Jon Husted, officially announced his long-expected candidacy for the GOP nomination.

Republicans have not had a closely-decided gubernatorial primary since 1944 when James Stewart defeated Attorney General Thomas Herbert by 0.4 points with Lieutenant Governor Paul Herbert just 5.4 points back.

Over the next 21 primaries through 2014, just two other GOP races were decided by less than 10 points: former Cincinnati City Councilman Charles Taft over Thomas Herbert by 8.0 points in 1952 and former four-term Governor Jim Rhodes in his last hurrah by 9.7 points over State Senator Paul Gillmor in 1986.

With the 2018 GOP race slated to be a barn burner, the prospects of Husted (also a former state senator and representative) coming out on top in both the primary and the general election are challenging at best.

In fact, his pathway to the office has been rarely blazed in Ohio politics.

A Smart Politics review finds that only one sitting or former Ohio secretary of state has been elected governor in state history with 11 such attempts made over the last century.

The only secretary of state to win the governorship in the Buckeye State is Bob Taft.

A former state representative and Hamilton County commissioner, Taft served as secretary of state from 1991 to 1999 and launched his gubernatorial bid while in office in 1998.

In what still stands as a state record nine-candidate gubernatorial primary field, Smith placed a distant fourth with 11.1 percent while Thompson won the nomination with 41.0 percent.

However, Thompson was narrowly defeated by 1.2 points in the general election by former Auditor Vic Donahey.

Over the next quarter-century, former or sitting secretaries of state would run for the governorship six more times in Ohio and failed on each attempt:

A generation would pass before another Ohio politician who had served as secretary of state would run for governor, due in part to Republican Ted Brown content in holding the office for a state record 28 years from 1951 to 1979.

After Taft’s consecutive victories in 1998 and 2002, sitting Republican Secretary of State Ken Blackwell (1999-2007) ran for governor in 2006 and defeated Ohio Attorney General (and former Auditor) Jim Petro to win his party’s nomination.

However, Blackwell was crushed by 23.9 points in the general election by Congressman Ted Strickland in the face of a national Democratic wave – marking the biggest loss by a GOP nominee across the 66 elections held for the office since the party first fielded a candidate in the state in 1855.

Prior to the primary era, no sitting or former Ohio secretary of state was elected governor or even won their party’s nomination. [A few made attempts, such as Republicans Benjamin Cowen and Samuel Galloway in 1867].