In an unusually competitive race, Democrats failed to pick up a GOP-held seat in the Palmetto State for a nation-leading 61st election in a row 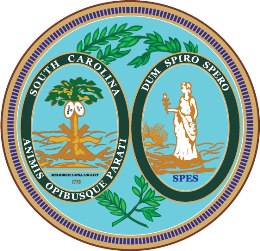 Jon Ossoff had practically become a household name in Democratic circles as the party’s nominee in Georgia’s 6th Congressional District special election became a symbolic focal point in the political battle against Donald Trump and the Republican Party.

As such, liberals bemoaned the results coming out of the Peach State Tuesday night as Karen Handel defeated Ossoff by 3.7 points in what was billed as the most expensive U.S. House race in the nation’s history at well north of $50 million.

But as Smart Politics noted last month: “If Democrats have ambitions to pick-up a seat in South Carolina in the near future, the upcoming 5th CD special would be the one to circle.”

Still, the closeness of the Parnell vs. Norman special turned many heads – and caused pundits to question the disproportionate funding that went into a losing cause in Georgia’s 6th.

Were national Democrats right to be so caught off guard in South Carolina?

Smart Politics examined South Carolina U.S. House elections since the turn of the 20th Century and found that the 3.2-point victory margin in the 2017 5th CD special election was the third most closely decided out of nearly 400 races.

Since 1900, the average margin of victory across the 393 general and special elections to the chamber has been a whopping 71.2 points.

Once the Republican Party began to garner support in the state after the passage of the Civil Rights Act in 1964, that number has declined to a still quite elevated 39.3 points.

Only two other U.S. House contests in the state have provided more election night drama than Tuesday’s special since the 1800s.

The most competitive race was held in 1992 when Republican attorney Bob Inglis knocked three-term Democrat Liz Patterson out of office in the 4th CD.

Inglis defeated Patterson by 2.9 points with 50.3 percent of the vote in a three-candidate contest.

Patterson, it should be noted, was the last South Carolina Democrat to flip a U.S. House seat – winning an open 4th CD seat by 4.1 points over Bill Workman in 1986. [The seat was held by exiting Republican Carroll Campbell who was elected governor that cycle].

Since Patterson’s victory, South Carolina Democrats have failed to flip a GOP-held seat in 61 consecutive elections to the chamber – the largest drought for the party in the nation.

Missouri Democrats have lost 59 consecutive pick-up opportunities since 1994 followed by Georgia at 50 in a row, Texas at 49, Ohio at 44, Pennsylvania at 43, Tennessee at 37, Oklahoma at 35, and North Carolina and Washington at 30.

The only other U.S. House election since the 19th Century that was closer than Parnell vs. Norman was 1976’s 5th CD contest between Democratic freshman Ken Holland and former New York Yankee Bobby Richardson.

Richardson, retired from the major leagues and coaching for the University of South Carolina, came within 3.1 points of defeating Holland and just the fourth GOPer to win a house seat from the Palmetto State since the 1800s. 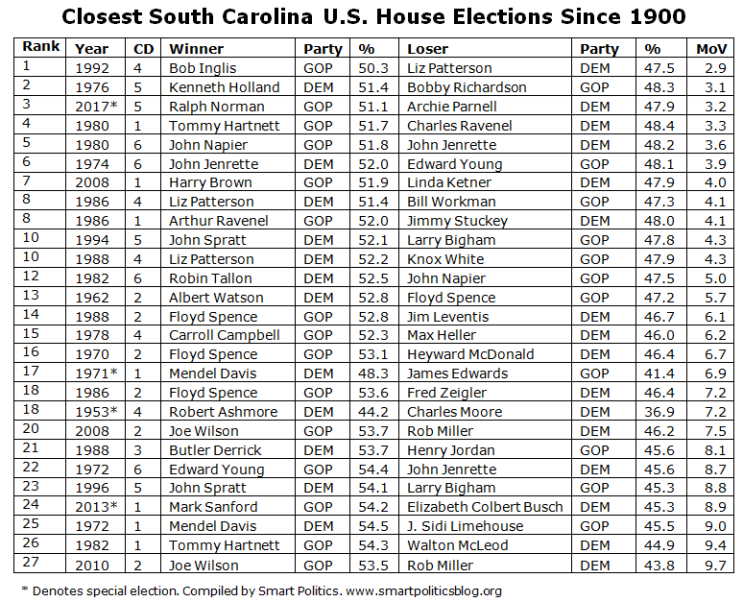