Less than a year and a half out from Election Day, control of the U.S. Senate for the 116th Congress seems assured to remain in Republican hands, with the GOP currently controlling 52 seats (plus Vice President Mike Pence as a tie-breaker) and only two of the party’s eight seats on the ballot this cycle considered to be remotely winnable for the Democrats (those held by Dean Heller of Nevada and Jeff Flake of Arizona).

As such, the electoral discussion has largely revolved around the extent to which Democrats can blunt Republican gains across the 23 seats it must defend next year (along with two independents that caucus with the party) particularly if Donald Trump’s approval ratings remain in the high 30s to low 40s at the time of the midterm election.

So just how well does the president’s party fare in U.S. Senate races?

Looking broadly at the data, Smart Politics examined the nearly 1,900 U.S. Senate elections conducted since 1913 and found that the party of the sitting president has managed to win nearly half of U.S. Senate contests – 894 out of 1,881 contests, or 47.5 percent.

Of course, if the 2018 cycle approximates that historical average, Donald Trump and the Republicans will be sitting pretty after Election Day with such a disproportionate number of Democratic seats appearing on the ballot.

Winning 47.5 percent of the 33 seats on the ballot next year would net the GOP seven seats, bringing their total to a near filibuster-proof 59 in the chamber.

That, however, would require Republicans nearly running the table on those aforementioned vulnerable Democratic seats in Trump states – something the party is not likely to accomplish while the president’s approval rating hovers in the high 30s to low 40s.

Moreover, when looking through the lens of more recent political history, the less likely it seems that the GOP is going to flip several states next year.

Over the last 50 years, the 10 states carried by Trump with Democratic incumbents have voted for the U.S. Senate nominee of the sitting president in just 68 of 176 races (38 percent).

Among these 10 states, the party controlling the White House has fared poorest in Ohio’s U.S. Senate elections over the last half-century, winning just four of 17 races (23.5 percent).

The president’s party has also struggled in U.S. Senate elections in Montana and Florida, winning just five of 17 races since 1966 in both states (29.4 percent).

Voters in Michigan, West Virginia, and Wisconsin only backed nominees from the sitting president’s party in 19 of 53 races collectively (35.8 percent).

Among these 10 Trump states, three aligned their senate vote with the party of the sitting president at least half the time: Pennsylvania (9 of 18 races), Indiana (10 of 18), and Missouri (11 of 18). 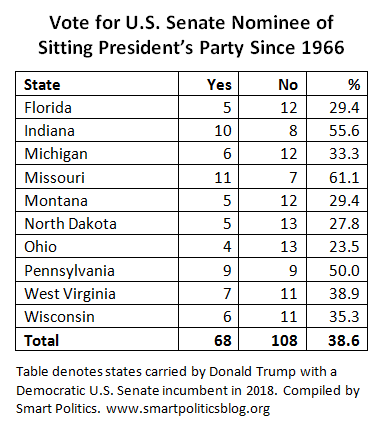 Of course, it’s theoretically possible that the reason these 10 states voted against the party of the sitting president in these senate races is because they frequently did not vote for the winning presidential candidate in the first instance.

But that’s not the case.

What’s striking is that these 10 states voted for the winning presidential nominee in 108 out of 140 elections over the last 14 presidential election cycles (LBJ through Trump), or 77.1 percent of the time.

Ohio backed the eventual presidential winner in each of the last 14 elections with Florida doing so 13 times, Missouri 12, Pennsylvania and Wisconsin 11, Indiana, Michigan, and Montana 10, and North Dakota and West Virginia nine. 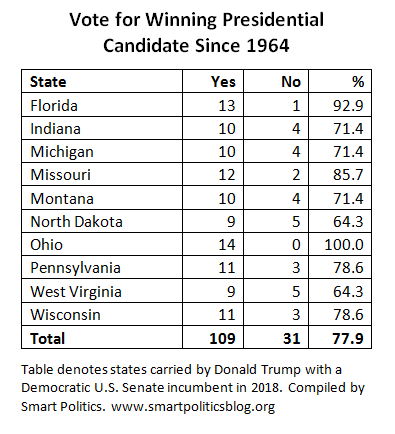 As for the two states with GOP U.S. Senators that Democrats are hoping to make competitive next year, the numbers don’t look much better for the GOP with the states backing the party of the sitting president in U.S. Senate races just 41 percent of the time since 1966 (six of 17 contests in Arizona, and eight of 17 in Nevada).