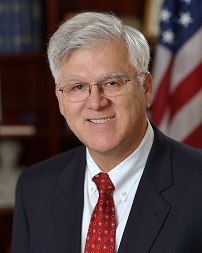 Six-term treasurer John Perdue (pictured) is the lone Democrat among the six such partisan offices in the Mountain State – winning his most recent election in 2016 by 6.6 points over Ann Urling.

Perdue had won each of his previous five terms by double-digits, with the GOP not offering up a nominee in two of those victories (2000, 2008).

To be sure, it is difficult to overstate the electoral success Republicans have enjoyed over the last decade in West Virginia, although Democrats remained fairly competitive for several state offices last November, despite Donald Trump’s historic 42.1-point win at the top of the ticket.

But the partisan trend line does not favor West Virginia Democrats and, as a result of Governor Justice’s decision to flip parties, Perdue’s name is now added to the list of a rather small but unique political club.

Smart Politics examined the nearly 300 popularly elected state executive officials across the country and found that seven, including West Virginia Treasurer John Perdue, are the lone Democrat or Republican in their state.

[Note: A few states were excluded such as Maine (Governor Paul Le Page), New Hampshire (Governor Chris Sununu), and Tennessee (Governor Bill Haslam) where there is only one such statewide partisan elected office as well as Alaska where there are two such offices, but Democratic Lieutenant Governor Byron Mallot serves alongside his independent running mate (Governor Bill Walker)].

In addition to Perdue in West Virginia, there are four other lone Democrats and two lone Republicans.

The 12.2-point victory by Bel Edwards in 2015 against scandal-plagued Republican U.S. Senator David Vitter was one of the few bright spots for Democratic gubernatorial nominees during the Barack Obama years. [Democrats won only 38.0 percent of elections for governor with Obama in office – which ranks 16th out of the 20 presidents to serve dating back to William McKinley].

Bel Edwards is the only Democrat among Louisiana’s seven elected executive offices, and ran 22+ points better than any of his party’s nominees two years ago – with Baton Rouge Mayor Kip Holden coming closest – falling 10.8 points shy in the race for lieutenant governor won by former Plaquemines Parish President Billy Nungesser.

The reason Democrats still hold the auditor seat is because it is the lone executive branch office elected during mid-terms and will be on the ballot next year.

Gallaway was appointed to the position in April 2015 by then Democratic Governor Jay Nixon following the suicide of Republican Auditor Tom Schweich earlier that year.

Like Perdue, Hood was another multi-term Democratic official that survived in the South during the last statewide election in Mississippi in 2015.

Although it was the closest decision of his career, Hood won by a decisive 10.6 points over Mike Hurst to win his fourth term to retain the only Democratic post among the state’s seven state constitutional offices.

No other Democrat came within 24 points of victory that November in the remaining six offices. [Former GOP State Senator turned Democrat Timothy Johnson was closest, losing by 24.5 points to Republican incumbent Tate Reeves].

The last time Democrats held any other state executive post was after the 2003 election when the party also was victorious in elections for secretary of state (incumbent Eric Clark), agriculture and commerce commissioner (incumbent Lester Spell), and insurance commissioner (incumbent George Dale). Spell switched parties in 2005, Clark did not run for reelection in 2007, and Dale lost his party’s primary in 2007.

Richardson was the first Republican to win a state constitutional office since Jack Roberts won the last partisan election for labor commissioner in 1994 – a string of 20 consecutive defeats across Oregon’s four partisan executive offices.

Oregon is tied with Washington for the largest Republican gubernatorial drought in the nation at nine consecutive elections since 1986.

Scott was also the lone Republican in executive office in the state out of six positions when he served as lieutenant governor after the Election of 2014.

In 2016 he retained that status by winning the governorship by 8.7 points in an open seat race with Donald Trump losing by 26.4 points at the top of the ticket.

Doug La Follette won his 10th non-consecutive term as Wisconsin Secretary of State in 2014, but only by 3.7 points in the GOP-friendly cycle.

La Follette’s Democratic ballot mates came up short by single digits in the race for governor/lieutenant governor (5.7 points), attorney general (6.2 points), and treasurer (4.1 points) to leave him the only candidate from his party to win a partisan executive office in the state since 2010.

[Tony Evers, who is running for the Democratic gubernatorial nomination in 2018, was elected to the non-partisan office superintendent of public instruction for the last three cycles].