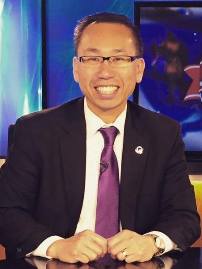 Cranston Mayor Allan Fung announced this week that he is running for governor of Rhode Island again in 2018, in hopes of winning the GOP nomination to set up a rematch with (likely nominee) Democratic Governor Gina Raimondo.

Fung lost to Raimondo by 4.5 points in 2014, with the former state treasurer defeating Fung with just 40.7 percent of the vote – tied for the 39th lowest level of support registered by a winning gubernatorial nominee across the nearly 1,900 elections conducted for the office across the country since 1900.

Fung will not have a clear path to the GOP nomination, however, with state representative and House Minority Leader Patricia Morgan entering the race just hours before the mayor on Monday.

Fung won the Republican primary in 2014 by just 9.8 points over Ken Block, one of a handful of other candidates who could conceivably yet jump into the 2018 race.

On the Democratic side, Raimondo has not yet officially launched her reelection campaign, and former Governor Lincoln Chafee is mulling another run at the office – this time running as a Democrat.

However, Raimondo and Fung should emerge as frontrunners, and if both candidates win their party’s respective nominations next year, the 2018 election will be added to a list of more than two-dozen gubernatorial rematches that have been conducted in Rhode Island.

But is there a track record for success of challengers who attempt to unseat incumbents in these rematches?

A Smart Politics review of Rhode Island gubernatorial elections finds that major party nominees seeking rematches have won six of 25 contests since statehood, with only five attempts over the last 100+ years.

The first of these five successful challenges occurred 200 years ago.

One year later, Knight returned to the ballot and eked out a 0.9-point win against Jones en route to his first of four terms.

It took more than 70 years – and 10 failed attempts – before the next successful rematch occurred in the Ocean State in a race for governor.

For three consecutive elections – in 1889, 1890, 1891 – no candidate won a requisite majority of the vote and so all three races were decided by the state legislature.

Davis secured a rematch in 1890 and again won a plurality with 48.8 percent (3.7 points better than Ladd) but this time was victorious in the legislative vote to return to the governor’s office for his second non-consecutive term.

In 1891, Ladd sought a rematch in his own right against Davis and came in second in the general election for a third straight cycle – this time with Davis short of a majority by a percentage point. Just like two years prior, Ladd was again elected governor in the legislature coming off a second place general election finish.

Del Sesto won his party’s nomination again in 1958 and knocked Roberts out of office with a 1.8-point victory that November.

The last successful rematch came in 1990 in the third and final contest between Republican Governor Edward DiPrete and Democratic attorney and Providence School Board member Bruce Sundlun.

Two years later, DiPrete escaped with a 1.6-point win despite Republican presidential nominee George H.W. Bush losing the state by double-digits at the top of the ticket.

In 1990, the three-term governor’s luck ran out and DiPrete was ousted in an absolute landslide, falling to Sundlun by 48.3 points. [Courtroom battles stemming from corruption that took place during DiPrete’s tenure would soon follow].

Most of the 19 failed rematch attempts over the last 200 years have not been competitive, with the challenger losing the rematch by an average of 23.6 points.

Overall, challengers came closer to victory in the rematch slightly more than half of the time (in 14 of 25 attempts, or 56 percent).

Although Raimondo has not yet launched her 2018 reelection campaign, the state’s first female governor is intending to run for another term.