Smart Politics recently highlighted that Jeff Flake is the first U.S. Senator from Arizona not to seek a second term since statehood.

But although the announcement of his departure may have been more dramatic – and more heavily covered by the media – than those made by his predecessors, the junior senator from the Grand Canyon State is nonetheless one of many legislators in the chamber who decided not to run for a second term after serving only six years.

Smart Politics reviewed the nearly 300 retirements made by U.S. Senators that have taken place during the direct election era and found that 39 percent were members in their first term including 15 percent who, like Flake, had been elected to a full term.

Of the 289 U.S. Senators who retired from the chamber since the passage of the 17th Amendment, 112 were in their first term:

Prior to Flake, there were seven U.S. Senators who did not run for reelection after serving a single six-year term since the turn of the 21st Century:

With Flake’s announcement, at least one U.S. Senator elected to a full six-year term has retired in 30 of the 53 election cycles held since 1914.

The largest number of one-term senators to retire at the end of their six years in office in a given cycle took place in 1978 with three leaving the legislative body: Oklahoma Republican Dewey Bartlett retired due to ill health (dying less than two months after leaving office), South Dakota Democrat James Abourezk resumed the practice of law, and Virginia Republican William Scott left to practice law with his sons.

However, there have been periods in which such retirements were rare.

During the six cycles from 1962 through 1972 no one-term members who served a full six years retired from their seats. 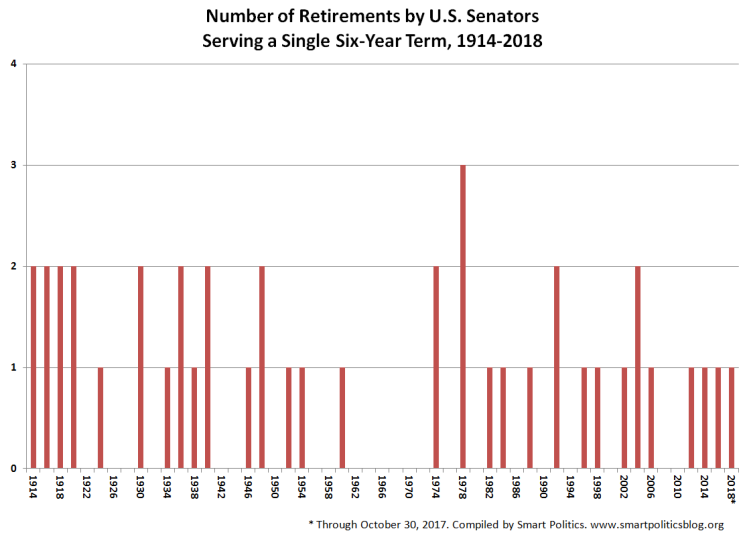 Only 22 states have had a U.S. Senator retire after a single full term since 1914.

Overall, the nearly 300 U.S. Senators who retired from their seats since 1914 served an average of 12.7 years at the time of their exit from the chamber.

[Note: Senators who did not seek reelection but resigned shortly before the end of their term were still counted as having ‘retired’ from their seat].