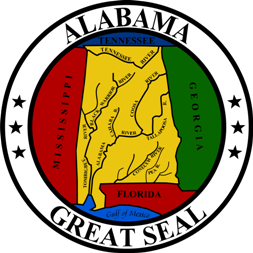 Barring a too-close-to-call nail biter, Alabamans will know who their 42nd U.S. Senator is by the end of Tuesday evening.

Either Republican Roy Moore or Democrat Doug Jones will be the choice of a majority of voters – unless a groundswell of write-in votes denies the winner 50+ percent of the vote.

Despite clamoring to the contrary in some quarters, Moore will be seated if he is victorious, but it is possible – if GOP leadership sticks to their prior statements – that an ethics investigation would soon follow.

The findings of that investigation could trigger the rarely used parliamentary tool of expulsion, thus cutting short Moore’s stint in the legislative body – and setting in motion another gubernatorial appointment and special election for the seat.

Meanwhile, if Jones is elected, he would serve through the end of the 116th Congress – January 3, 2021. Jones would be up for election in November 2020, but he would likely enter that race as a big underdog in the heavily Republican state.

In short, there is a decent chance that whichever candidate is elected on Tuesday will have a fairly short political half-life in the U.S. Senate.

But that would not be unusual in the Yellowhammer State.

Of the 41 men and women sworn into the U.S. Senate from Alabama since statehood, nearly a quarter – 10 – have served less than a full year.

If Moore is elected and faces an ethics investigation, he will need to last 144 days, or approximately late May, to avoid becoming the senator with the shortest stint in the office in Alabama history. [Mitch McConnell recently stated Luther Strange will serve through the end of this year, so neither Moore or Jones would be seated until January 2018].

That current record is held by two Alabamans: Democrats Dixie Bibb Graves (1937-1938) and George Swift (1946) were each in office 4 months and 22 days (144 days) after being appointed to their respective seats.

Swift, a former state legislator, was appointed by Governor Chauncey Sparks to fill the vacancy after the death of John Bankhead II in June 1946.

A majority of the remaining Alabamans who served less than a year in the senate were also appointees:

If Jones is elected Tuesday and loses reelection in 2020, he would exit the chamber with the 15th shortest service from Alabama with approximately three years under his belt depending when he would be seated in January 2018. 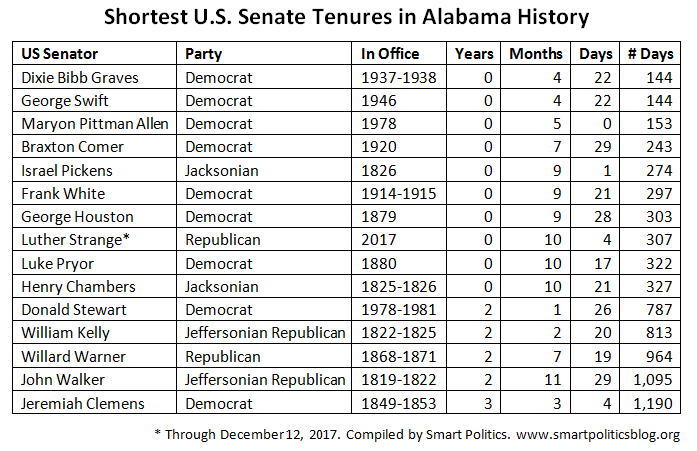 Shelby, who was just reelected in 2016, will pass Hill in two weeks and be the longest-serving Alabaman in state history on March 3, 2019.