With Lamb’s win, eight out of the last 26 U.S. House seats to flip have been in districts where the winning party did not recruit a nominee during the most recent election cycle 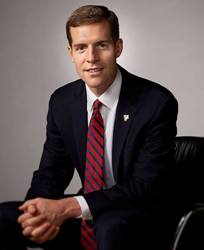 For starters, the race was just the second time a Pennsylvania U.S. House seat has flipped in a special election out of 29 such contests since 1951.

Before Tuesday’s race, Democrat John Murtha’s 0.2-point win against Harry Fox in February 1974 is the only time a seat has changed partisan control in a Pennsylvania U.S. House special election over the last 65+ years.

If Lamb’s lead holds, it will also mark just the second special election pick-up by a Democrat in Pennsylvania (along with Murtha’s win in 1974) out of 19 attempts over the last 80+ years.

Prior to the aforementioned Murtha victory, the last Democratic pick-up of a Pennsylvania U.S. House seat in a special election came in November 1933, when attorney Oliver Frey won the 9th CD without opposition from a Republican. [Republican Henry Watson defeated Norton Lichtenwalner by 4.0 points one year prior in a post-redistricting incumbent vs. incumbent matchup].

Overall, there has been a change in partisan control in just 11 of the 71 U.S. House special elections conducted in Pennsylvania since 1900, or 15.5 percent of such contests.

Much was made of Donald Trump carrying the 18th CD district by 20 points at the top of the ticket in 2016, although the district was only his 8th best showing across the state’s 18 districts. [The 18th CD has a +11-point GOP tilt according to Charlie Cook’s Partisan Voter Index].

But a Lamb win particularly stands out as unique among these 11 pick-ups since the turn of the 20th Century because his party did not even field a candidate in the district the last time the seat was on the ballot (in fact, the last two times –Rep. Tim Murphy won his seat unchallenged in both 2014 and 2016).

By contrast, several of the previous 10 seats to flip in Pennsylvania since 1900 had hosted fairly competitive races in the cycle prior to the special election. Five were decided by single digits and three others by less than 15 points.

While Lamb’s feat may have been unusual in Pennsylvania politics, it is a story that has played out several times across the country during the last few decades.

In fact, eight of the last 26 pick-ups in U.S. House special elections since 1980 occurred in districts where the winning party did not field a candidate during the previous cycle.

In addition to Conor Lamb/PA-18, the other seven are:

During the four decades prior to 1980, such pick-ups were more rare.

From 1941 through 1979, in only four of 49 special elections did a party pick up a seat in which they did not recruit a nominee the last time the seat was on the general election ballot:

Overall, 12 of 75 flipped seats in special elections since 1941 were in districts where the winning party could not field a candidate during the previous election cycle (16.0 percent).