Women candidates for the court have won 15 of 19 elections overall, with three defeats coming against other women 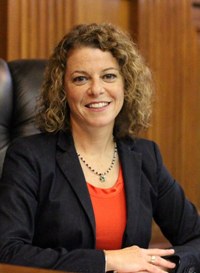 Judge Rebecca Dallet’s decisive 11.6-point victory over Judge Michael Screnock in Wisconsin’s Supreme Court election on Tuesday not only set in motion the Badger State attaining the highest percentage of female justices across the 50 states when she is seated this summer (86 percent, six of seven seats) but also continued the impressive electoral run women candidates for the office have achieved over the last few decades.

The victory improved the record of Wisconsin women supreme court candidates to 15-4 in general elections – with three of those losses to other women candidates.

Wisconsinites have demonstrated little hesitation backing women at the ballot box against male candidates for the office, tallying a 10-1 record ever since Shirley Abrahamson’s name was first put to voters in 1979 following her 1976 appointment.

In 1994, Justice Janine Geske (appointed to the bench in 1993 by Governor Tommy Thompson) recorded what still stands as the largest victory margin by a woman in a contested Wisconsin Supreme Court race – defeating Waukesha attorney William Pangman by 54.4 points.

In 2009, Abrahamson won her third race against a male opponent (and fourth election overall) when she defeated Jefferson County Circuit Court Judge Randy Koschnick by 19.4 points.

The only instance in which a woman lost a supreme court election in the state to a male candidate was in 2011 when Assistant Attorney General Joanne Kloppenberg was defeated by Justice David Prosser by 0.5 points in what was a high profile proxy election for Democrats who were angered by the policies of newly-elected Governor Scott Walker.

The race was one of the most closely-decided for the office in state history.

Each of the three other losses women recorded in Wisconsin Supreme Court general elections were against other women.

In 2016, Kloppenberg – this time sitting on the Wisconsin Court of Appeals – made another attempt to win a seat on the supreme court, but lost to Justice Rebecca Bradley (appointed to the Court by Walker in 2015) by 4.7 points.

In two elections, incumbent women justices won reelection to their seats without opposition: Ann Bradley in 2005 and Annette Ziegler in 2017.