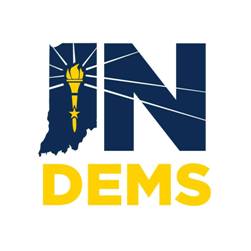 It is not out of character for Hoosier State Democrats to rally behind a single candidate for the nation’s upper legislative chamber.

In fact, the party has served up only one contested primary for the office over the last 12 cycles since 1988.

Hill, of course, bowed out after receiving his party’s nomination last cycle in July 2016 so that former Senator Bayh could enter the race.

The only cycle with a contested Democratic primary during this three-decade span came in 1994 when former U.S. Representative Jim Jontz defeated perennial candidate Willie Taylor by 9.6 points en route to a 36-point loss to Dick Lugar in the general election.

Since 1988, there have been more cycles during which Indiana Democrats did not field a candidate in the primary (2006, 2010) than cycles with more than one candidate on the ballot (1994). [Note: The party fielded no nominee in 2006 but in 2010 designated U.S. Representative Brad Ellsworth as its nominee in May of that year].

To be fair, neither major party in Indiana has a rich history of serving up competitive primaries since they were reintroduced in the state in the mid-1970s following a nearly 50-year absence (when nominees were selected via nominating conventions).

The GOP did host one barn burner of a primary during that quarter-century span, however, when Fort Wayne Mayor Paul Helmke eked out a 1.9-point win with 35.2 percent of the vote against attorney John Price and attorney and Ronald Reagan speechwriter Peter Rusthoven just 3.6 points behind.

Following the 2006 cycle, however, Republicans have generated several interesting primary matchups – ousting one incumbent (Lugar, by Richard Mourdock, in 2012) and attracting a former U.S. Senator (Coats in 2010) and five U.S. Representatives (John Hostettler in 2010, Todd Young and Marlin Stutzman in 2016, and Todd Rokita and Luke Messer in 2018) into the last four primary fields.

While rallying behind an incumbent senator like Donnelly in 2018 is understandable – consolidating resources for what is likely to be a tough general election battle – the Democratic Party’s record of three wins versus nine losses during this 30-year period leaves its general strategy, or candidate recruitment efforts, open to scrutiny.