The 4th CD race is the 10th rematch among major party nominees for the office in state history; each of the previous nine losers were unsuccessful in the rematch 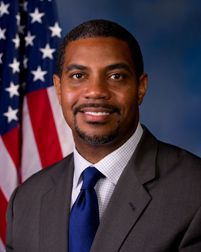 Democrat Steven Horsford (pictured, 2013-2015) won 61.7 percent of the vote in a six-candidate field while Republican Cresent Hardy (2015-2017) captured a plurality win with 47.4 percent also against five other candidates.

The Horsford vs. Hardy contest will be a rematch of the 2014 race in which Hardy eked out a 2.8-point win to unseat the freshman incumbent with popular Governor Brian Sandoval paving the way in a blow-out victory at the top of the ticket.

When the two nominees square off in November, it will be the first time in state history that two former U.S. Representatives from the Silver State will meet up on the general election ballot – let alone in a rematch.

Prior to Horsford and Hardy, former U.S. House members from Nevada have made it back onto the general election ballot six times over the decades, winning four of them:

The Horsford vs. Hardy race also marks the 10th rematch among major party nominees for a U.S. House race in Nevada out of 112 contests since statehood.

In each of the previous nine instances, the candidate who lost the initial race was also defeated in the rematch:

The aforementioned Wegner is the only major party nominee to get a third chance at defeating an opponent for the U.S. House in Nevada.

In addition to the individuals listed above are two other notable failed third-party candidates who launched unsuccessful rematch bids.