In 2018, as many women were nominated for the U.S. House in Georgia by major parties as in each of the last five cycles combined

This is the fifth in a series of reports tracking women winning major party nominations to the House of Representatives in 2018. The first four reports featured Nebraska, Idaho, Virginia, and New Mexico. 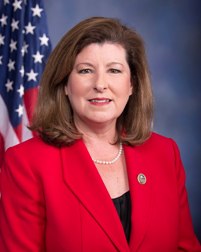 Joining Bryan County Democratic Chair Lisa Ring in the 1st, registered nurse Tabitha Johnson-Green in the 10th, and freshman GOP congresswoman Karen Handel (pictured) in the 6th, the Peach State will have five major party women nominees for the U.S. House in the 2018 cycle – tied for the most in Georgia history.

By contrast, only five women were nominated out of the 117 nominations made by the two parties across the previous five cycles from 2008 to 2016.

Democrats and Republicans fielded nominees for 26 of the 28 major party slots on the ballot across the state’s 14 congressional districts this cycle (92.3 percent) – the largest percentage in more than a decade (25 of 26 in 2006, 96.1 percent).

Women have now been nominated to the office a total of 42 times by major parties in general and special elections including at least one during 14 of the last 15 cycles since 1992 (all but 2014).

The 1940 cycle saw the first two women nominated for the office in Georgia – the aforementioned Florence Gibbs who won October 1940’s special and Mrs. J. Ben Warren – a Republican from Monticello.

In July 1946, despite winning the popular vote by 10.3 points with a majority 51.5 percent, Representative Helen Mankin lost her renomination bid to Superior Court Judge James Davis due to the county unit system that was still in effect in Georgia primaries that favored rural areas.

Mankin ran a general election write-in campaign that November and won 38.3 percent, but lost by 23.4 points.

Following congresswoman Blitch’s retirement in 1962, no women were nominated to the U.S. House from Georgia for seven straight cycles until Republican Louise Wofford – a housewife from Gainesville – in 1976’s open 9th CD race.

Just two women won nominations through the next seven cycles.

Shapard faced educator Newt Gingrich in his third attempt at winning the seat. Shapard came up 8.8-points short that November in what would be Gingrich’s second closest electoral victory during his congressional career.

In 1986’s open seat race in the 5th CD, Republican journalist Portia Scott was nominated in a primary runoff but lost by 50.6 points to famed civil rights leader John Lewis.

Over the last quarter-century, more than a dozen other women nominees have lost in November:

The 2018 6th CD race between Rep. Handel and Lucy McBath is the fifth matchup between two major party women nominees.

The five women nominated in 2018 ties the high water mark previously set in 2000 when congresswoman McKinney, Joyce Griggs, Gail Notti, Sunny Warren, and Denise Freeman all appeared on the general election ballot. Three women were nominated in 1992, 1998, and 2004.