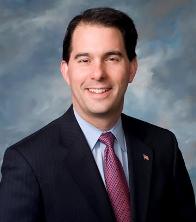 Scott Walker suffered through an embarrassingly short-lived 2016 presidential campaign and now, three years later in a bid for reelection, the Wisconsin Republican is hoping his incumbency advantage will be enough to stave off incoming national Democratic headwinds in his race with Tony Evers – another officeholder who has won election to statewide office three times.

All signs indicate the Evers vs Walker contest should be a tight, competitive affair – something Badger State voters are quite used to in recent cycles.

Wisconsin enters the 2018 race having hosted a competitive gubernatorial election for five consecutive races, which is tied for the second longest streak in the nation.

Only three other states are in the midst of an equal or greater streak when it comes to competitive gubernatorial contests.

Rhode Island has done so for the last six cycles:

That makes sense, of course, as candidates can run for state office slightly more immune from the partisan infections that plague national politics.

However, the 2018 battle in Wisconsin between Evers and Walker will have to be a bona fide nail-biter to come close to gaining the status as the most competitive gubernatorial race in state history.

To date, four of Wisconsin’s gubernatorial races since statehood have been decided by less than one percentage point:

[Note: The state’s 1855 contest was originally won by Democratic Governor William Barstow by 0.2 points (157 votes) over state Senator Coles Bashford, but the Supreme Court eventually ruled Bashford the winner by more than 1,000 votes].