Democrats have to defend plenty more competitive seats this cycle, but a bad November for Republicans could write them into the history books 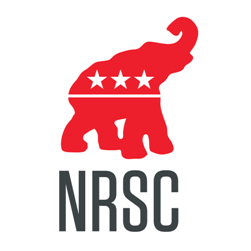 With the political environment still pointing to notable Democratic gains in gubernatorial and U.S. House elections around the country this November (as well as scores of state legislative seats), the big question mark revolves around the battle for control of the U.S. Senate: will a GOP-favored electoral map prevent the Democratic caucus from netting two seats and gaining a majority?

But as Republicans try to pick off seats from a shrinking pool that still includes Claire McCaskill (Missouri), Heidi Heitkamp (North Dakota), and Bill Nelson (Florida), they continue to be exposed in open seats in Arizona and Tennessee as well as with incumbents Dean Heller (Nevada) and, in the eyes of a few prognosticators, perhaps even Ted Cruz (Texas).

However, due in part to the electoral oddities of this cycle, even if Republicans are able to hold onto seats in these four aforementioned states and pick off one held by the Democrats – which would be a banner night for the party – Donald Trump will finish his second year in office presiding over the worst record for a president’s party in U.S. Senate races in the direct election era.

Winning what would be an impressive 10 of the 35 seats on the ballot this November would give the GOP a 10-26 record during Trump’s first two years, or a winning percentage of 27.8 percent.

Of course, Trump would see this winning percentage increase in 2020 with the GOP controlling at least 21 of the 34 seats scheduled to be on the ballot and Democrats owning only 11. [The control of two remaining seats will be determined this November in special elections in Minnesota and Mississippi].

But whether Trump serves one term or two, it would hardly be unusual if Republicans ended up losing a good deal more U.S. Senate elections than they won over the course of his presidency.

In fact, none of the previous eight presidents beginning with Richard Nixon were able to shepherd their party to a winning record in U.S. Senate races during their administrations.

Since Lyndon Johnson, the president who came closest was George W. Bush. Republicans won 65 of 136 senate races during his eight years in office, or 47.8 percent.

So far just four of the 18 presidents in the direct election era have led their party to winning records:

After Ford, the presidents with the worst records are Herbert Hoover (32.1 percent), Warren Harding (35.9 percent), and Dwight Eisenhower (35.5 percent). 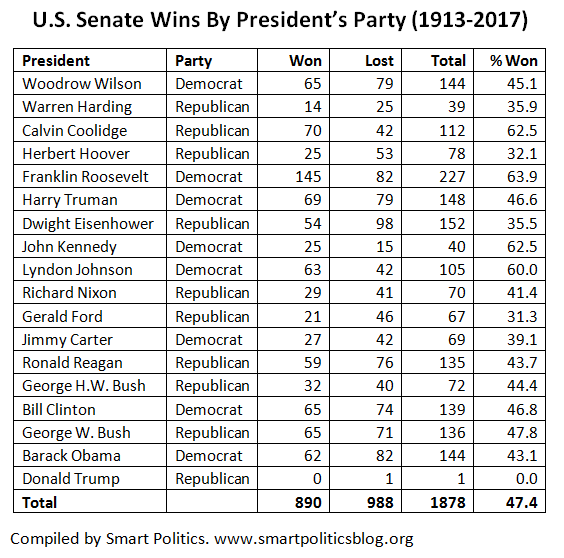